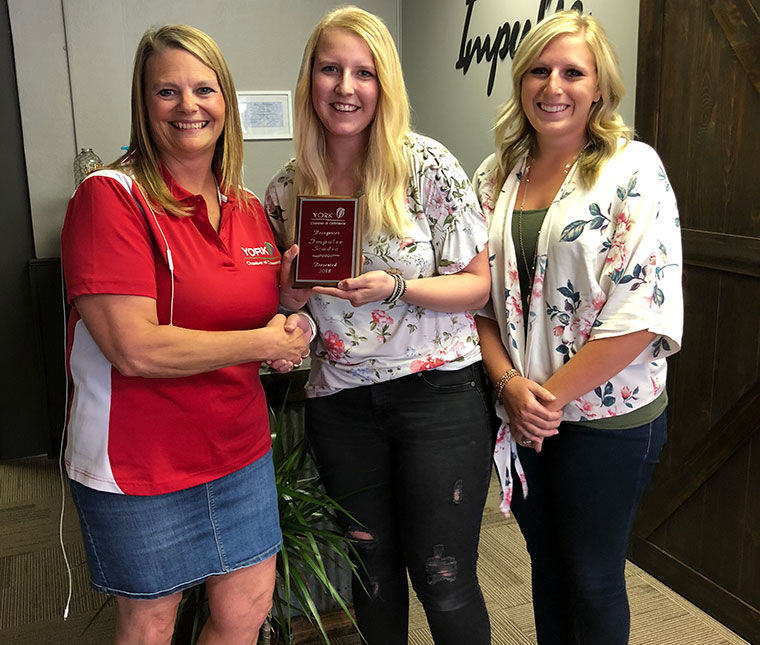 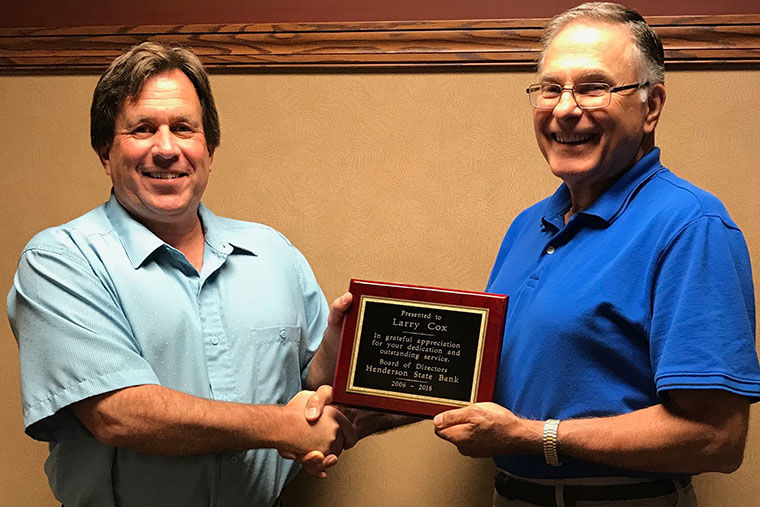 Kevin Postier (left), President of Henderson State Bank, presented Larry Cox a plaque for his service and dedication as Chairman of the Board for the past 12 years. “We wish to thank Larry and wish him well in his future endeavors,” said Postier.

Kevin Postier (left), President of Henderson State Bank, presented Larry Cox a plaque for his service and dedication as Chairman of the Board for the past 12 years. “We wish to thank Larry and wish him well in his future endeavors,” said Postier.

Kylie McGowan had always dreamed of having her own shop and now she’s made that dream a reality. She has opened Impulse Studio at 212 West 6th Street in York right next door to the York Massage Therapy location.

Her card said Cosmetologist and Esthetician. The cosmetologist part everybody pretty much knows. It’s all the basic hair stuff from cuts to colors to perms. She says she also does a lot of hair extensions, something that is not very prevalent in York.

She grew up Kylie Vanesch, the daughter of Kim and Scott Vanesch, who moved here from Washington State in 2005. She then attended and graduated from York High School in 2014.

McGowan moved to Grand Island where she attended Xenon for 14 months after which she earned her cosmetology license. She moved back to York and went to work at The Personal Touch. After some time there she moved back to attend Xenon for a four month program on esthetics. Then back to York until in March of this year when she finally made the decision to go out on her own.

“This location just kind of fell into my lap,” she said. “Someone said they had a space for me and we got it ready with a lot of help from family members.”

She isn’t by herself either. Jenna Tickle rents a booth from her and features men’s cuts and also does nails. Tickle has a barber’s license along with her cosmetology license. She attended and graduated from the College of Hair Design.

“Our hours are pretty much by appointment,” said McGowan. “We have a Facebook page under Impulse Studio, LLC.

McGowan also makes times for family. Along her path to owning her own studio, she married her high school sweetheart Cody McGowan. The couple has two children; Colton who is five years old and Casem who is five months old. The couple lives in the country between York and McCool Jct. with their kids and two puppies. The family likes to spend time outdoors which includes camping.

Abbey to perform on TKO Aug. 17

A couple of weeks ago the York News-Times featured a story on Bryce Abbey, a former University of Nebraska – Kearney wrestler who is now a professor at UNK. Abbey competed on the new television show TKO which is hosted by Kevin Hart.

At that time, Abbey wasn’t sure when his episode would air. We now know that it will be shown on Friday, Aug. 17 at 7 p.m. according to his in-laws Rex and Bonnie Liedtke of Gresham.

Abbey is married to the former Erin Liedtke.

If you haven’t watched the show, it usually involves five competitors, each who tries to make it across a complicated moving course while the other four competitors are trying to knock them out and off the course. Check it out.

Have someone you love? Give them a hug today.