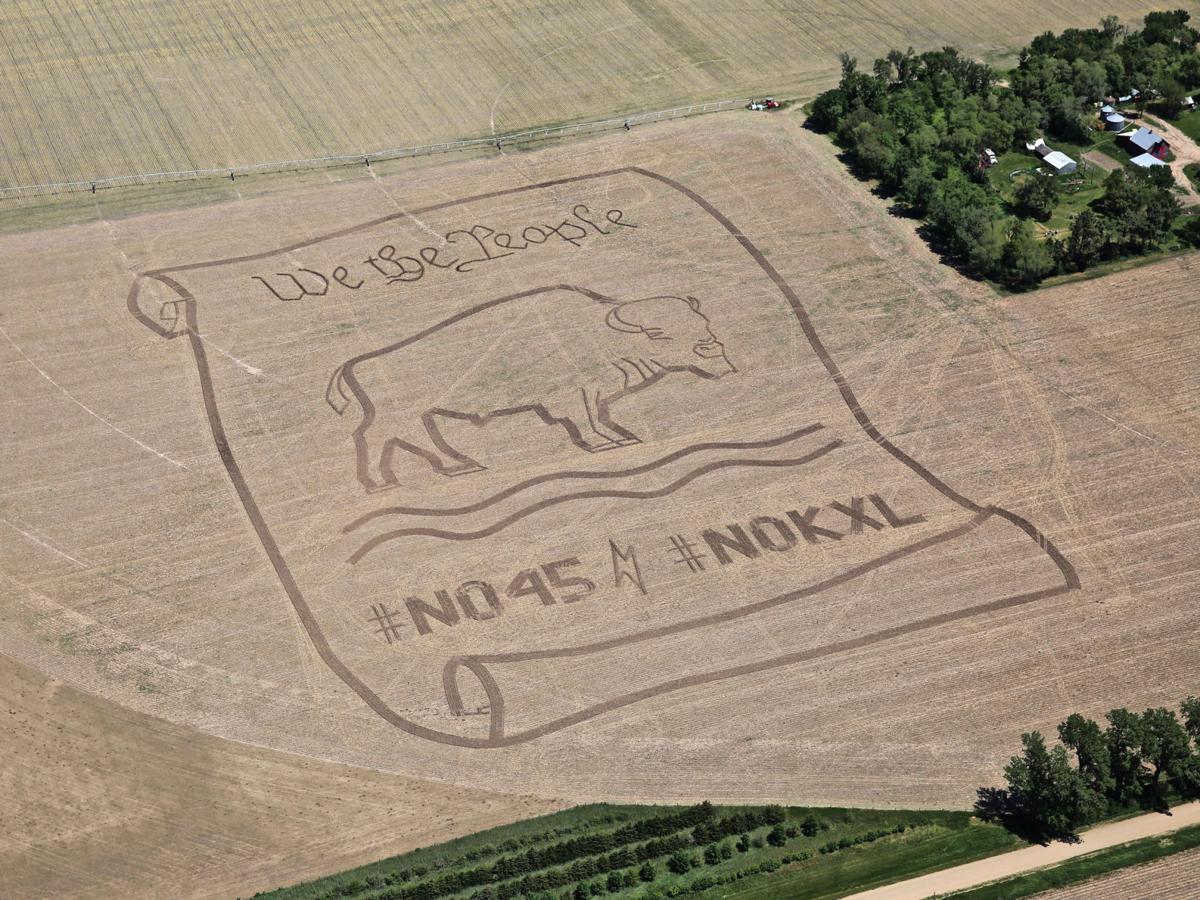 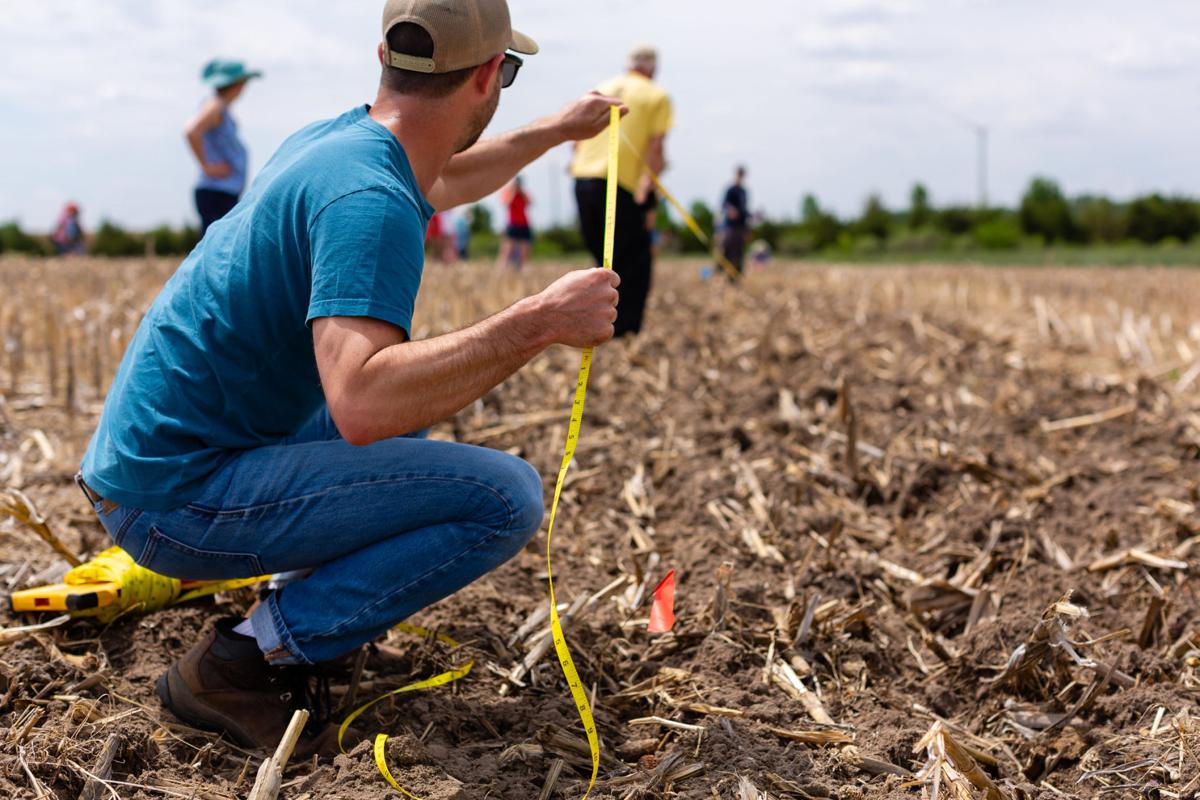 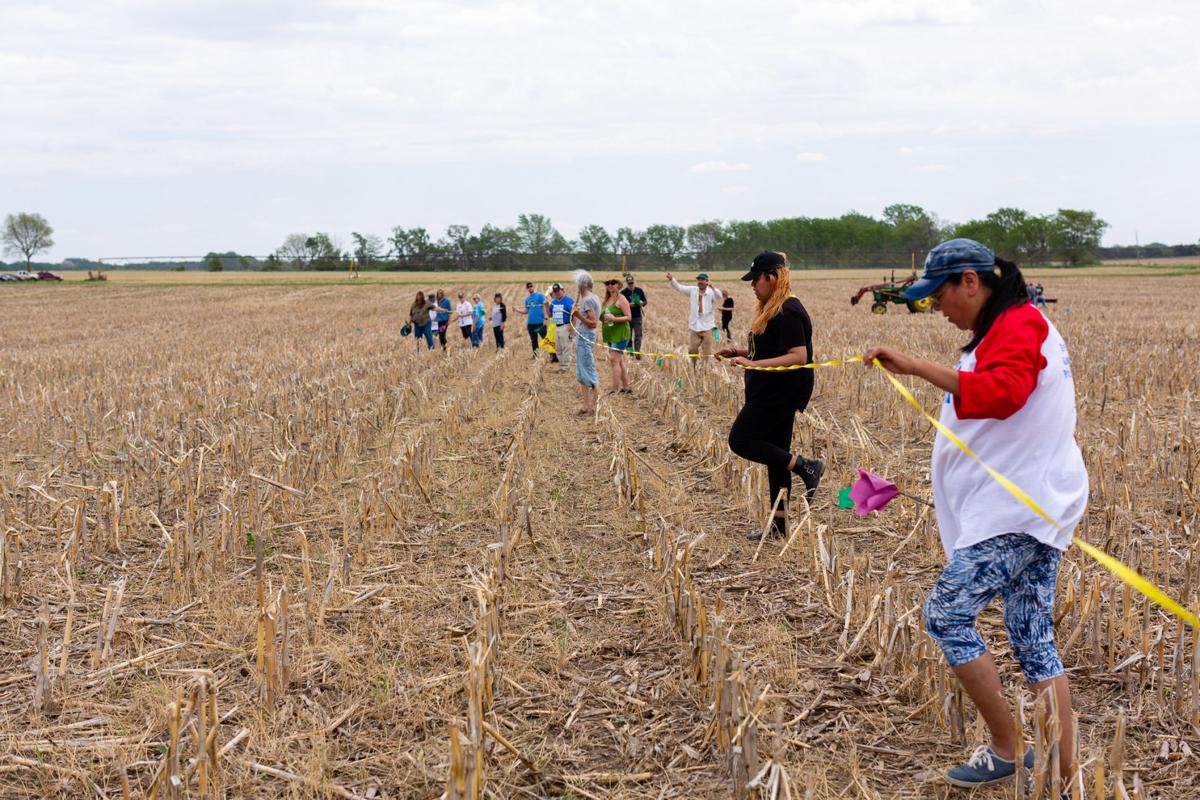 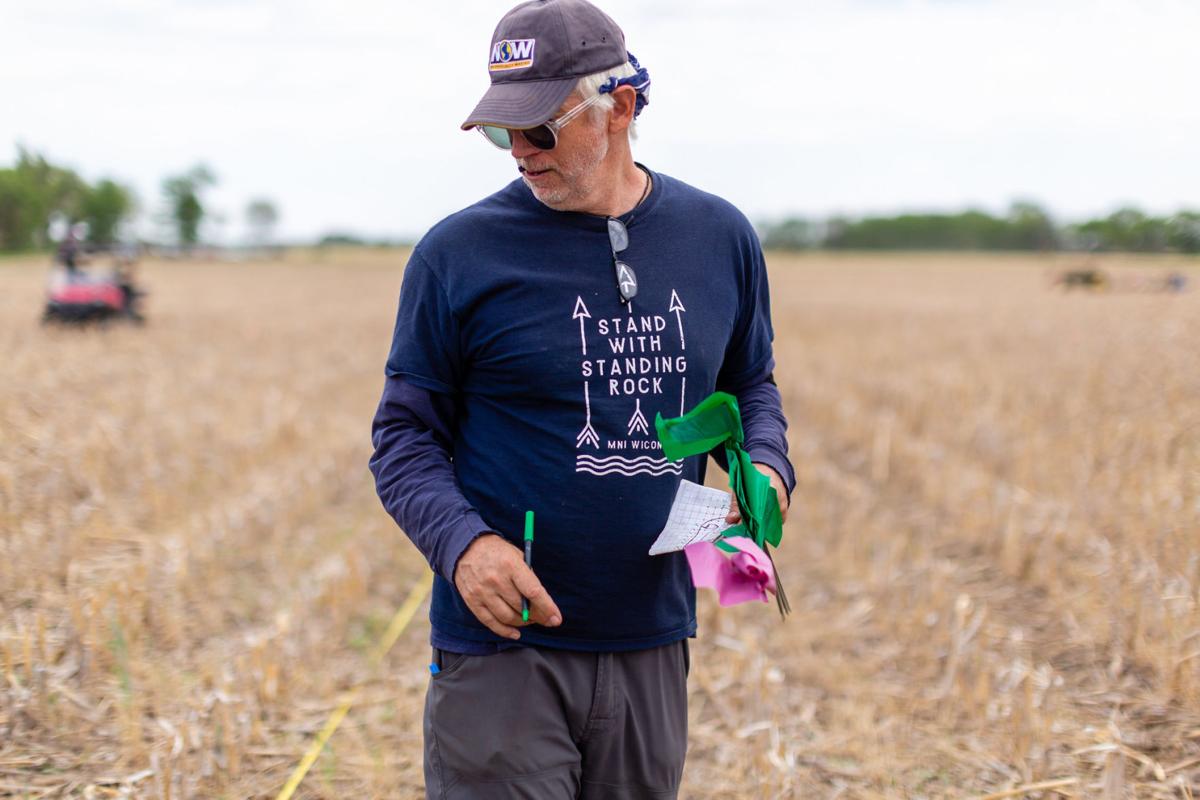 Neligh, NE — A gigantic message to President Trump, etched into a 33-acre Nebraska cornfield was unveiled on Wednesday, featuring the U.S. Constitution’s “We the People” and iconic images of a bison and water paired with the twin hashtags “#No 45” and “#No KXL,” in direct reference to the current President and the proposed Keystone XL tarsands export pipeline.

“Pres. Trump stands on stage saying he loves farmers while approving a foreign export pipeline using eminent domain on Americans,” said Jane Kleeb, Bold Nebraska founder. “The land is everything to farmers and Tribal Nations, and Trump continues to show his lack of respect and understanding. We the people have stopped this risky pipeline for 10 years and will not let a reckless President destroy our land and water.”

“’We The People’ – Farmers, Ranchers, and Tribal Nations have come together to protect the land, water, and people from the Keystone XL pipeline. The Crop Art is a reminder that the strength of America comes from its people,” said Nebraska farmer and “tractor artist” Art Tanderup, on whose family’s land the Crop Art was created.

“Our people depended on the buffalo and used all of it for food, clothing and tools. It sustained our people for generations. They are our relatives, part of our clan. They were driven to near extinction until people took measures to stop and protect them. Today this is a symbol and reminder that the same is happening to Mother Earth. The people here want to stop the continued, systematic exploitation practices that harm our environment and resources,” said Chairman Larry Wright, Jr., Ponca Tribe of Nebraska.

“It was an honor to work with the Tanderups and water protectors to create the ‘Heartland Constitution’ Crop Art that sends a clear message to the president to reject this dirty tar sands export pipeline. The design represents the great American values of strength, freedom, democracy, and the importance of protecting land and water,” said artist John Quigley, who led the team that created the #NoKXL Crop Art.

Nebraska farmers and ranchers, and Tribal Nations, continue to recover from historic Midwest flooding, as well as Trump’s tariffs and trade wars, during the middle of planting season. These folks came together to help send the President a gigantic, cornfield-sized message that we do not want TransCanada’s dirty tarsands export pipeline crossing Tribal lands or sacred sites like the Trail of Tears, or threatening our state’s precious land and water.

The #NoKXL Crop Art is based on a design conceived by Lakota artist Steve Tamayo with input from several Tribal Nations and local Nebraska artist Justin Kemerling, and a sketch by artist Jessica K. The image was created last weekend by nearly 100 volunteers who attended the Sixth Annual Sacred Ponca Corn Planting on the Tanderup farm — and land land now deeded to the Ponca Nation — that lies directly in the path of the proposed KXL pipeline as well as the Ponca Trail of Tears.

The farm just north of Neligh has been in Art and Helen Tanderup’s family for generations, and for the past five years has been used to restore the Ponca Tribe’s sacred corn to the indigenous people’s ancestral homeland, following a 137-year absence — after the Tribe’s forced removal from their lands by the U.S. government along the “Trail of Tears” route that also crosses the Tanderup farm. The Ponca Sacred Corn was certified by the USDA and is a significant cultural resource. Last summer, the Tanderups signed a deed returning the ancestral tribal land on which the corn has been restored back to the Ponca Nation.

The Ponca Tribe of Nebraska has been working, along with many Nebraskans who wish to preserve this sacred and culturally significant area, to establish federal and local protections and an official historical designation for the Ponca Trail of Tears.

Pres. Trump recently incorrectly stated the Keystone XL pipeline was under construction, and also incorrectly stated the pipeline would bring 45,000 jobs to Americans, when all analysis shows the project would create at most 2,500 jobs during construction. Legal hurdles continue to keep the pipeline in limbo, including a Nebraska Supreme Court case and various other legal challenges to water permits.