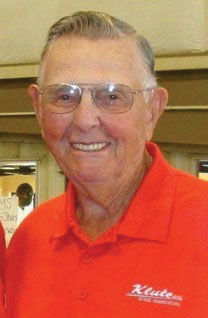 Klute is being honored at this year’s York-Hamilton County Cattlemen’s Banquet for his contributions to the cattle industry – contributions that helped shape the thriving business into what it is today – Klute Steel.

The Bradshaw native and Korean War Veteran has an active history in agriculture. Klute was raised in a farm family, and for a time, farmed himself north of Hampton. He also had a stint as an Oregon berry farmer. The farm consisted of 25 acres of berries, but Klute’s wife Janice didn’t find northwest winters so sweet. “She asked me one day, ‘Have you ever thought of doing something different in your life?’”

He had; Klute had always had an interest in design and welding. “It was just something that I always had in the back of my mind if I couldn’t make it farming,” he said.

Upon returning to York County in the early 1960s, Klute honed his skills in welding and repair, working in York at Albert Tietmeyer’s welding and repair shop. In 1961 Klute and Janice started Klute Welding. The Bradshaw business did many types of welding and repair work, and created innovative agricultural products by working closely with area farmers. Knowing producers’ needs were paramount, Klute said.

“There were many different things people would come up with – you’d just work it out,” he said modestly.

Klute remembered an early project Klute Welding took on for Kopchos Sanitation of York. They wanted a hang tote for their truck to eliminate the need for workers to dump it by themselves, manually. “I remember kidding the dad – I said, ‘Well, you got a plan?’” His client’s response, Klute said: “’No… I think you can figure it out.’”

Klute Welding (now Klute Steel) also sold and installed hoists and grain boxes for straight trucks. Klute said his business also made area cattle farmers squeeze chutes and gates – among a variety of other projects, which Klute took on in earnest. “What people wanted, we’d try to fix it for them.”

Klute recalled a bitterly cold winter morning – 14 degrees below zero, to be exact – when he got a call from a local cattleman. The feed wagon axle broke in the feed lot and “of course the cattle wanted to get fed,” Klute said. By this time cattle had gathered around the disabled wagon, hungry. “I said, ‘This fix will be enough to get you unloaded.’ It just came with the shop; people wanted something done, so we’d do it.” Klute recommended the farmer bring the feed wagon into the shop later for permanent repair. “We got it fixed.”

In the early 1970s Klute bought out the Schwartz grain box line, which opened up even more opportunity for the company, as they started manufacturing Schwartz-style grain boxes. The Klute shop also sold and repaired self-unloading truck-mounted feed bodies.

In recent years, Klute Steel has mostly turned to substation and transmission work. Still, Klute remembers the roots of the family business. “We did fix a lot of cattle equipment.”

The 72nd installment of the annual York-Hamilton County Cattlemen’s Banquet, slated for Tuesday, Jan. 28, will recognize Klute and Roger Bamesberger of Hampton for their contributions to the area’s livestock industry and the Cattlemen’s Association itself. Klute’s work in the area agriculture industry was also recognized in 2017, being inducted into the York County Ag Hall of Fame.