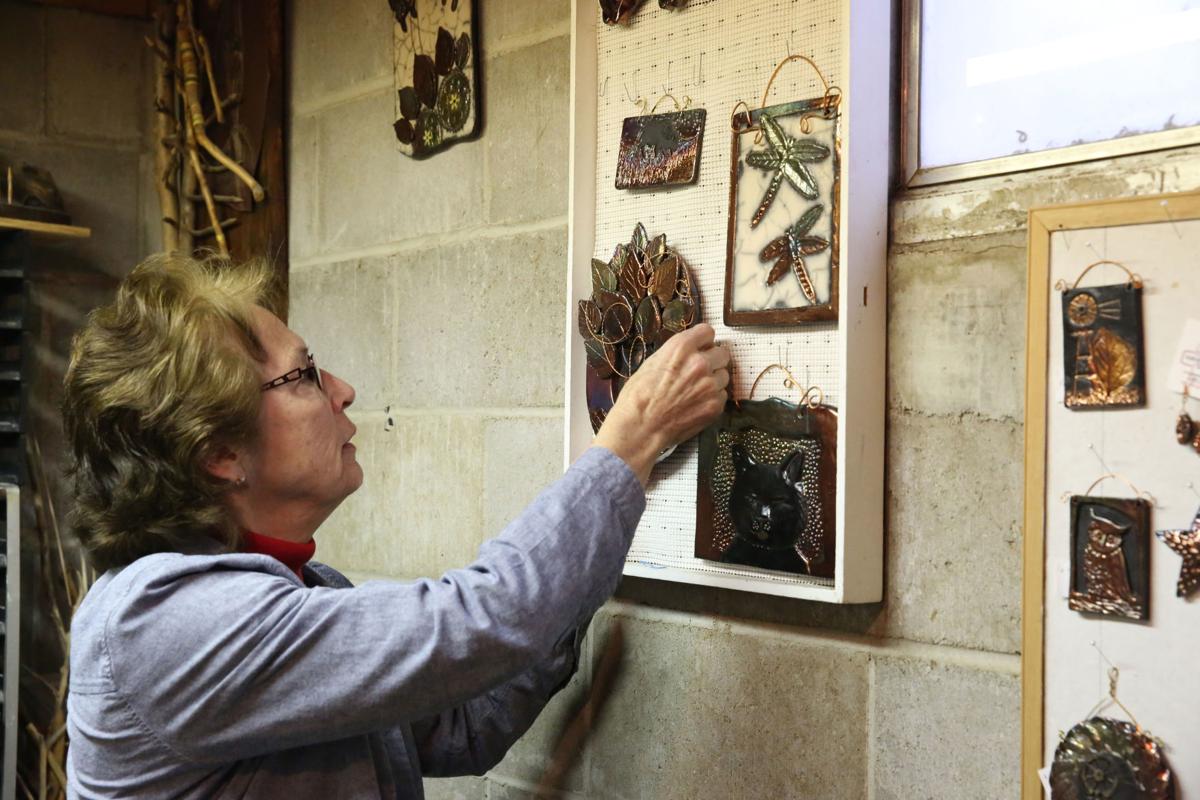 York artist Karen Kohtz adjusts one of her creations hanging in her workspace. Three of Kohtz’s clay sculptures won honors at the 2020 International Cone Box Show, which showcases miniature ceramic creations small enough to fit into a 3” x 3” x 6” box. 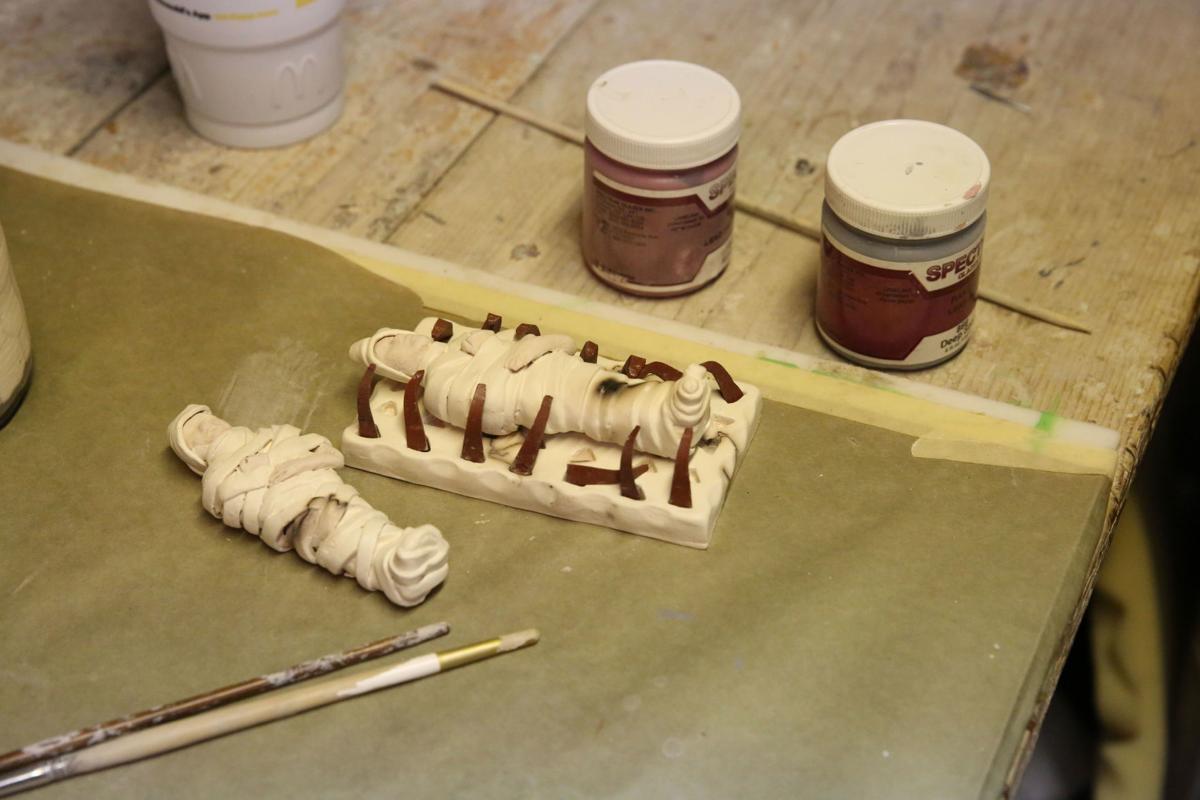 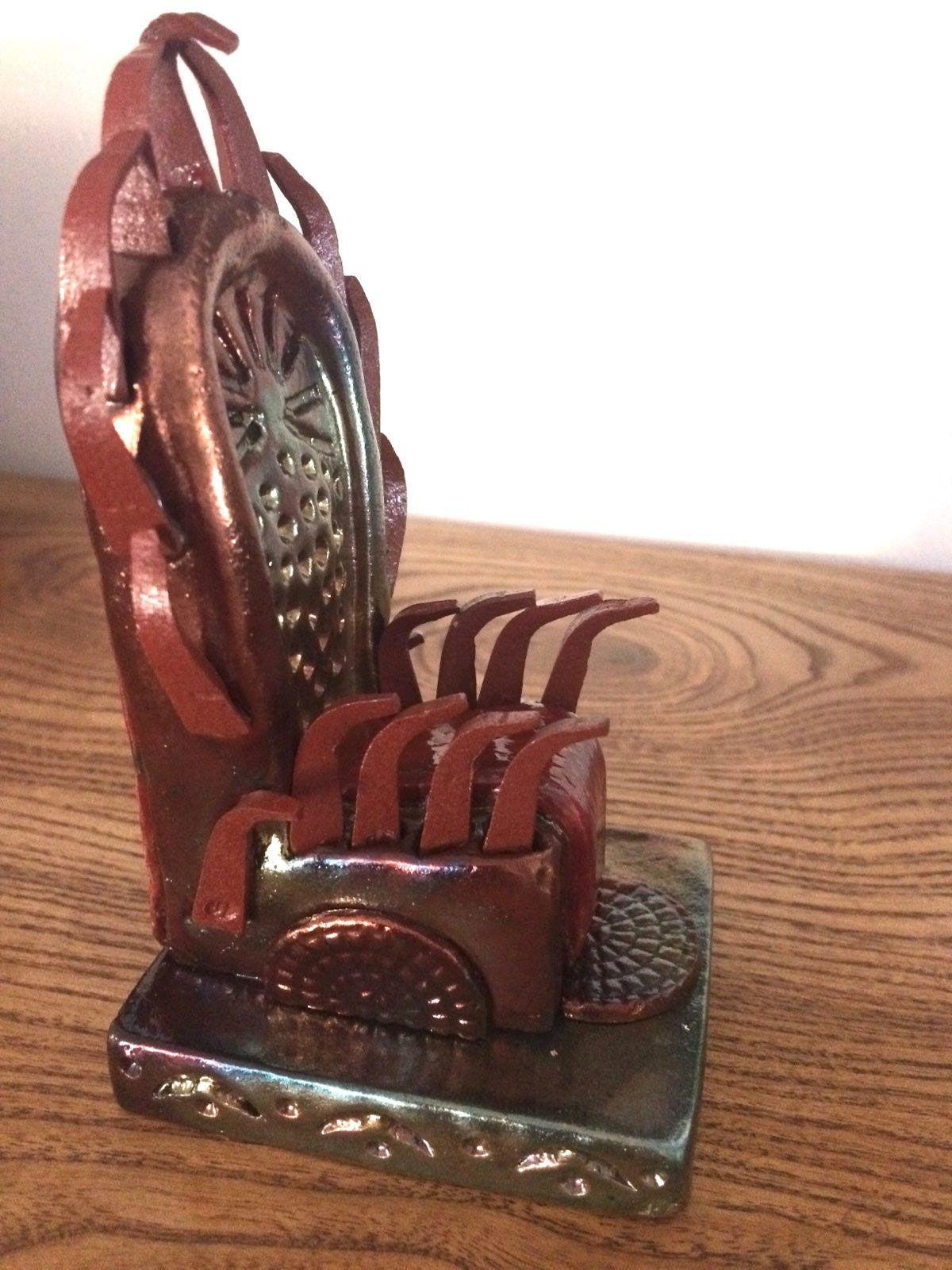 York artist Karen Kohtz adjusts one of her creations hanging in her workspace. Three of Kohtz’s clay sculptures won honors at the 2020 International Cone Box Show, which showcases miniature ceramic creations small enough to fit into a 3” x 3” x 6” box.

“He [Bill Bracker] thought a show of miniatures would be awesome,” said Anne M. Bracker, vice president of Bracker’s Good Earth Clays and daughter of Bill Bracker. The specific, small size also keeps shipping costs down, and “puts everything on a level playing field,” Anne M. Bracker said. According to the International Cone Box Show’s website, “A potter can have great slides of a not-so-great pot or lousy slides of a great pot, but a juror may never know until the actual piece is seen in person.”

“A photo of a three-dimensional piece doesn’t reveal all of the attributes of the actual piece,” Anne M. Bracker said.

The practical aspects of a miniature show spurred Kohtz to submit her work. “I usually don’t enter purely juried shows,” she said. Entering the juried International Cone Box Show turned out to be worth her while; all three of Kohtz’s submissions received recognition.

The International Cone Box Show is a biennial event. This edition of the show premiered January at Bracker’s Good Earth Clays in Lawrence, Kan. Juror and renowned ceramics artist Winnie Owens-Hart selected the 42 competing pieces, which will also be exhibited during the annual National Council on Education for the Ceramic Arts conference in Richmond, Va. towards the end of March.

“She [Owens-Hart] wanted to choose the best example of the style of the artist,” Anne M. Bracker said.

Kohtz’s Best of Show winner, “Lazarus,” draws inspiration from resurrection, featuring a white enshrouded figure surrounded by curved cone boxes. “Since it was a cone show I wanted to do something set on a bed of cones,” Kohtz said.

Pyrometric cones are generally used as tools, rather than as artistic elements. “It’s like a clay thermometer,” Anne M. Bracker explained. “They are formulated by certain materials just like the pots. They bend and form at a specific temperature.”

Kohtz incorporated the typically utilitarian element, and several trial pieces led to the final creation. “I worked through it to find something I like,” she said. “It just kind of evolved.”

“She has an amazing style all her own,” Anne M. Bracker said. “It really is a stunning display of talent and manipulation of the material.”

Kohtz said her favorite finishing method is Raku reduction, which results in a metallic – but unpredictable – glaze. Other methods tend to be more consistent, and less of a guessing game when preparing for the kiln. “Some things you put on brown, and it’s brown,” she said. The reaction created during Raku reduction creates unique, but unreliable results. “It’s insanely unpredictable,” Anne M. Bracker said. “It’s kissed by the fire.”

Kohtz indicated she is not intimidated by the unpredictability. “It’s difficult to be a perfectionist with Raku. I do like the surprise,” Kohtz said. “If it’s really awful I can re-glaze it.”

Kohtz’s adventures in Raku reduction began in her barn several years ago with a small electric kiln and a reduction can. Kohtz’s first experience with clay in general was a Kearney State College art class, getting her hands dirty on a potter’s wheel. She said in her earlier education, formal art classes weren’t offered at every school – including her own.

Kohtz eventually became an art teacher herself, first at Bradshaw Public School and eventually Heartland Community Schools. She taught for 29 years, inspiring students to be makers. “When I taught it was more about students doing – the possibilities for them,” Kohtz said, adding that her students tended to gravitate to her favorite medium. “The first thing they’d ask at the beginning of the year is ‘When are we going to work with clay? When are we going to make pots?’”

Kohtz lamented students’ often limited access to art once their education comes to a close. “After graduation, they don’t have that space or the materials.” Kohtz has her own kiln, and creating space. Sculptural wall hangings, earrings and other pieces line the walls of the tiny room reserved for Kohtz’s shaping and supplies. A surface smaller than a desktop is reserved for rolling out raw clay, and shelves of many sizes hold a variety of sculptors’ materials.

She sells some of her work on consignment, including crane-themed creations at the Crane Trust Nature & Visitor Center in Wood River, Neb. -- a good fit, as much of Kohtz’s work, she said, is inspired by the natural world around her. “A lot of things I do is mainly nature; a lot of leaves, trees – that sort of thing.”

“You wouldn’t want to eat or drink from a Raku piece,” Anne M. Bracker said. “Raku is a decorative process.”

Raku’s decorative process lends itself to Kohtz’s approach; she said she enjoys experimenting. “I’m always trying to do something a little bit different.”

After a bit of thought, Kohtz named her favorite piece: “Probably the next one.”

The International Cone Box Show is sponsored by the Orton Ceramic Foundation and Bracker’s Good Earth Clays. Kohtz’s winning sculptures, along with those of her contemporaries, can be viewed at https://theconeboxshow.com/

What types of gatherings, situations are now prohibited in York County?