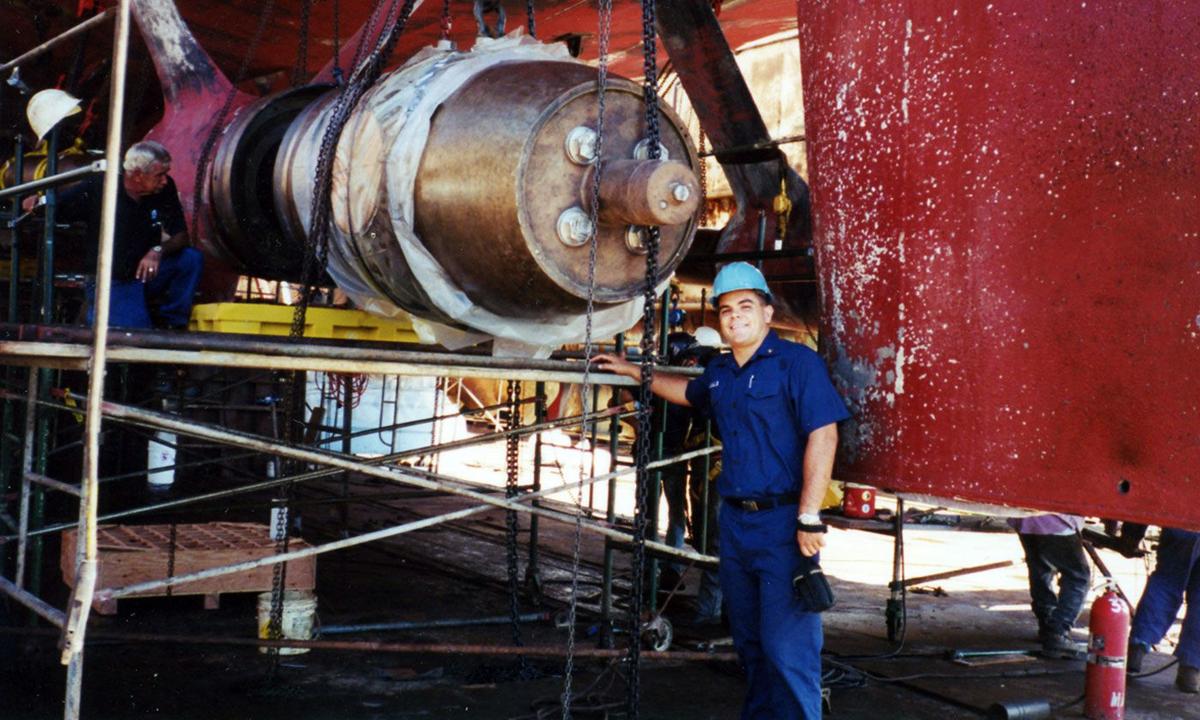 This photo, taken in 2001, shows Ken Miller on the dry dock floor of a ship being worked on in Hawaii. These massive ships would be pulled up out of the water – into dry dock – so the mechanics could work on them. 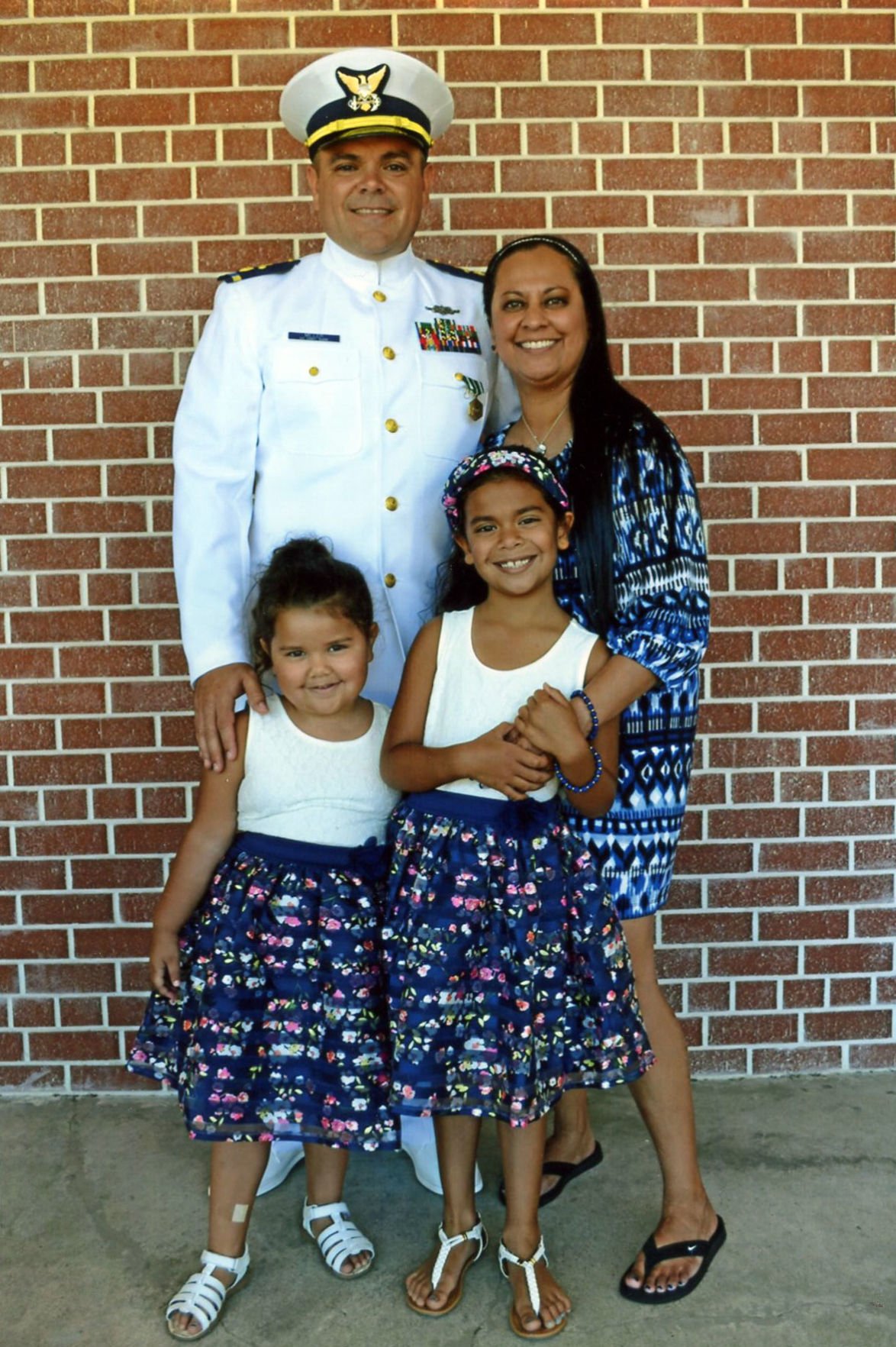 Chief Warrant Officer 3 Kenneth Miller is shown with his wife, Roni, and their daughters, Peyton and Aubrey, at his retirement ceremony on July 22, 2016. The ceremony was held on Coast Guard Island at Alameda, Calif.

This photo, taken in 2001, shows Ken Miller on the dry dock floor of a ship being worked on in Hawaii. These massive ships would be pulled up out of the water – into dry dock – so the mechanics could work on them.

Chief Warrant Officer 3 Kenneth Miller is shown with his wife, Roni, and their daughters, Peyton and Aubrey, at his retirement ceremony on July 22, 2016. The ceremony was held on Coast Guard Island at Alameda, Calif.

YORK – When Kenny Miller was an eighth grader, guidance counselors were in his classroom to help the kids think about what they might want to do in their future lives.

Miller didn’t need any guidance – already at that young age, he had his mind up.

“I just told them I’m going into the service and that was it,” Miller said.

The kid from Madera, Calif., grew up in a family with a lot of military service. His father, Gene, was a Vietnam veteran who had served in the Air Force. His uncle served in the Navy. Miller’s grandfather served in the Army – along with his three brothers – in World War II.

It was just natural for Miller to navigate toward service, he says. “I knew I needed it, the structure, it fit my personality,” Miller says. “When making my choice about branch of service, it came down to the Air Force and the Coast Guard – I picked the Coast Guard.”

Miller says a close relationship -- built between he and his parents with his recruiter over his teenage years -- well prepared him for what would turn out to be a 20-year career.

Right after high school, he went to boot camp in New Jersey, which Miller called an “eye-opening experience.” After boot camp, he was off to Astoria, Ore.

Miller quickly moved up the ranks, achieving new ranks as quickly as possible.

“I was very blessed and fortunate to have the leaders I had,” Miller says, “in order to advance so quickly. I pretty much worked toward making rank as quickly as they’d allow advancement.”

He served in a wide variety of duty assignments that involved unique Coast Guard operations and support. Throughout his 20-year career, he patrolled the Pacific Ocean, Gulf of Mexico and the Alaskan waters of the Bering Sea.

His service spans pre-Sept. 11th and post-Sept. 11th. He vividly remembers the infamous day of Sept. 11, 2001, and how the Coast Guard became part of Homeland Security rather than the Department of Transportation. He also remembers how security measures changed, how things they watched for changed, how they could no longer tell family members where they were going . . . all the while living out the motto of the Coast Guard, “Semper Paratus,” which means “Always Ready.”

Missions have included everything from seizing ships filled with cocaine to making daring rescues of those in danger at sea to responding to oil spills and much, much more.

Being at sea isn’t easy, he said, remembering moments of being in the top rack of a sleeping area on a 210-foot vessel – so high up, he couldn’t roll over without hitting overhead pipes. There were the early days of scullery (also known as dishwashing and cleaning) on a bouncing ship on rough waters. There were early moments of sea sickness. There were the hours of working in hot engine rooms, keeping ships moving along.

“I was a mechanic by trade,” Miller says. “It’s really, really loud in those engine rooms. It’s dangerous, as there is a lot of rotating equipment, it was really, really hot in there, especially when we were by the equator. There were a lot of hazards, but they definitely stressed safety. And they rotated us out all the time. Thankfully, nothing bad happened on my watch.

“In order to boost morale when we were out at sea, we would anchor and have ‘swim call,’” Miller remembered. “Basically, we’d all jump overboard and we’d get to swim in the middle of the ocean. During swim call, we would have sharp shooters or qualified shooters on hand for shark watch. I know that people spend lots of money to whale watch or be on a sunset cruise, but I was fortunate to see all of this while I was at work.”

Miller says one of the best parts of being in the Coast Guard was seeing areas of the world he’d never have seen otherwise. His favorite place to visit was Hong Kong.

“We were just friends who graduated high school together,” Roni says. “He went to the Coast Guard, I went to York College. I graduated college and stayed on in York as an admissions counselor. In 2006, I moved back to Madera.”

It was at their 10-year high school reunion that the two ran into each other. Thankfully, Miller was in port.

“We exchanged numbers and email addresses, then we started dating,” Roni said. “We were married in 2008.”

Soon they were joined by two daughters – Peyton and Aubrey.

Miller was no longer alone in his service – eight years were spent with a wife and kids at home.

“After I was married with kids, I just didn’t want to be gone on a ship nine months out of the year,” Miller said. “I can’t give my wife enough credit for all that I put her through. While I was out at sea, or traveling up and down the West Coast, she was at home. She kept her stresses from me. She knew I needed to have a clear mind. She kept all her worries and sleepless nights to herself. The life of a military spouse is rough and she handled it all with so much strength. I know that I was the one sworn in, but a military spouse is just as important to our mission.”

Then, in 2014, Roni received a phone call that would change everything. A friend from York College contacted her, saying there was an opening for the position of softball coach at the college – a position Roni says was her “dream job.”

“I knew he was coming up near his retirement years, I just didn’t know if he was ready to do it, he was just so good at what he did in the Coast Guard,” Roni explained. “We talked about it and he said, ‘Twenty is it, 20 years is enough. You can chase your dreams now, call the college.’”

The pair flew to York, Nebraska, to visit the president of York College and for her to interview for the job. It was a pretty big change for Miller – he’d been around water his entire life and there sure wasn’t much in York.

“I told them at the college that they would have to sell it to him, if we were going to move here,” Roni said, while both laughed.

“The biggest reason I said yes to the move was because the college president supported us,” Miller explained. “I still had two more years left in the Coast Guard and we would have to live apart during that time, if she was going to take the job at York College. He was more concerned about supporting us as a couple, making sure our marriage could withstand that separation, more than he was concerned about her only being a successful coach.”

“We knew then that we already had a place that loved us,” Roni said, about York College and the York community.

Those years of separation were tough, they both acknowledge. “Airport good-byes were awful,” Miller said. “I remember a time we were in the car on our way to the airport as I was leaving to go back. Peyton was just six years old – she saw the Eppley sign and asked if I was leaving. I just lost it and so did she.”

On July 22, 2016, a long-earned retirement ceremony for United States Coast Guard Chief Warrant Officer 3 Kenneth Miller was held on Coast Guard Island at Alameda, Calif. “On that day, I felt a weight lifted off my shoulders. I loved my military life, I was thankful for all of it, but the stresses of it all were finally gone. I said now we can go to Nebraska.”

And they’ve been here ever since. Roni is still the successful softball coach at York College – a program her husband heartily supports.

Today, he works in an area he says he “never saw coming. I was approached last year about being a para-professional working with special education students at York Elementary School. I said I didn’t know enough about kids, but Dr. Erin DeHart persisted, saying I should apply because she thought I’d be good at it.”

He applied, he got the job . . . and he loves it. He also feels so fortunate he can have and love vastly different life experiences, in one life.

And he says he loves the York community.

“I love it here, I love the pace of life,” Miller says. “The people here are so nice, there’s no traffic, I’m even OK with the snow and the weather.”

He says he was particularly “blown away” last year when attending his first Veterans Day program at York High School. “It was just really special,” he says quietly.

“I didn’t know how I was going to adapt to the civilian sector, but I had long been told I would know when it was time to retire. The transition can be really hard to adapt to because life before had so much structure. But it was time. I’m glad I did, I’m glad we are here.”

One of the best things about his service career came in the form of people he met along the way. “Some friends I had 20 years ago are still my closest friends, I still communicate with my mentors. My mentors didn’t just teach us how to be a Coast Guardsman, they also were role models on being husbands and fathers .”

One of the hardest parts was leaving his family behind and saying good-byes.

Through it all, he fulfilled 20 years of service to a country he loves.

He was supported by a wife and family he has always been dedicated to and loves with all his heart.

And he’s thankful they could land in a place like York College and the York community where they have started the next chapter of their lives. In a place they love.

Hearing set for city’s one- and six-year street program

Incumbent filings for primary election come to an end