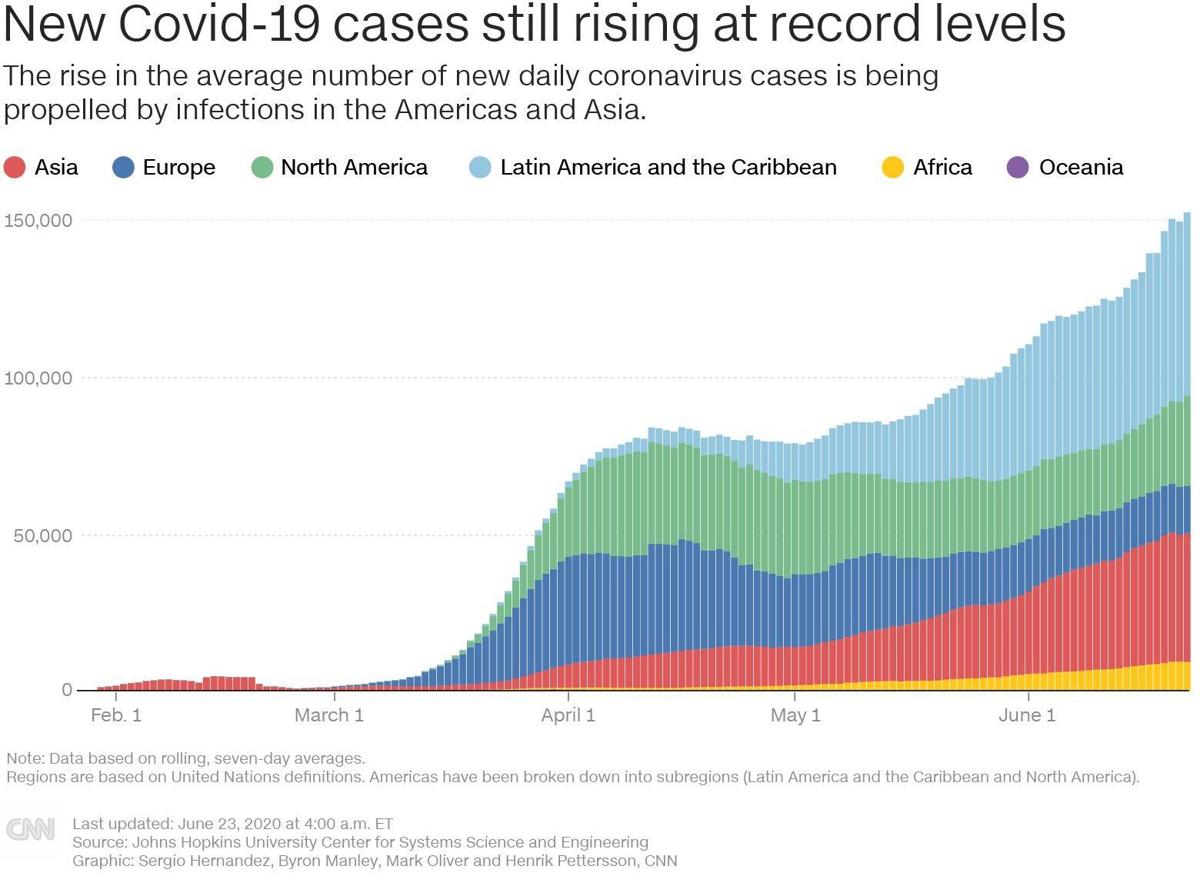 The rise in the average number of new daily coronavrius cases is being propelled by infections in the Americas and Asia. Full Credit: Sergio Hernandez, Byron Manley, Mark Oliver and Henrik Pettersson/CNN

In this photo taken Tuesday, June 16, 2020, a Washington National Guard medic wears full protective equipment while explaining to a driver how to insert a swab into their nasal passage at a coronavirus test site in Yakima, Wash.

The rise in the average number of new daily coronavrius cases is being propelled by infections in the Americas and Asia. Full Credit: Sergio Hernandez, Byron Manley, Mark Oliver and Henrik Pettersson/CNN

In this photo taken Tuesday, June 16, 2020, a Washington National Guard medic wears full protective equipment while explaining to a driver how to insert a swab into their nasal passage at a coronavirus test site in Yakima, Wash.

Half of US states are seeing spikes in new coronavirus cases -- and it's not just due to increased testing, health officials say.

And no state has effectively transitioned from stay-at-home orders "to a public health model of testing, tracking, isolating and quarantining," said Dr. Richard Besser, former acting director of the US Centers for Disease Control and Prevention.

"We have to figure out how to make that transition in a successful way, or every state that reopens -- even those that have done a really good job at tamping this down -- are going to see pretty dramatic rises," Besser told CNN Tuesday.

"And we're going to end up back to where we were."

Nationwide, more than 2.3 million people have been infected with coronavirus, and more than 120,000 have died, according to data from Johns Hopkins University.

"The next couple of weeks are going to be critical in our ability to address those surgings that we're seeing in Florida, in Texas, in Arizona and in other states -- they're not the only ones having difficulty," said Dr. Anthony Fauci, director of the National Institute for Allergy and Infectious Diseases.

During Fauci's testimony Tuesday in front of the House Energy and Commerce Committee, the nation's top infectious disease expert made a plea to all Americans:

Why the timing of these surges makes sense

Health experts say the spikes in new cases now coincide with states starting to reopen several weeks ago -- with many people refusing or abandoning safety measures such as wearing masks and social distancing.

"Two weeks ago, we had 17 states with increasing cases," said Michael Osterholm, director of the Center for Infectious Disease Research & Policy at the University of Minnesota.

Now, that number has jumped to at least 25 states. "And we're likely to move more states into that category of increasing cases very shortly," Osterholm said Tuesday. "So, we are seeing what in a sense is the reaction in the virus to opening up and having much more contact with each other."

After a new exposure to this virus, it can take up to two weeks for symptoms appear. After that, people might not get tested immediately. Then, it can take even longer for severe cases to require hospitalization.

Deaths from new Covid-19 exposures often don't get reported until several weeks after the new cases have been reported.

While health officials expected new cases as states reopened, many did not expect new cases and hospitalizations to rise so dramatically in some places.

Arizona set a new record this week for the number of people hospitalized on a given day with Covid-19 -- about 2,000, according to data from the COVID Tracking Project. The state's seven-day moving average of hospitalizations is also going up.

"People are being admitted to hospital beds and being admitted to ICU (intensive care unit) beds faster than they're being discharged," said Will Humble, executive director of the Arizona Public Health Association.

With about 84% of the state's ICU beds already full, Humble said he's worried hospitals will go into "crisis standards of care," which basically means "lower care for everybody, not just people with Covid-19."

In California, Los Angeles County reported a new single-day record for new cases on Monday, with 2,571 new cases. And statewide, California recorded more than 35% of its total infections from the entire pandemic in just the past two weeks.

It's not just increased testing

Some politicians have attributed spikes in new cases to increased testing. But in many places, the number of new Covid-19 cases are disproportionately higher than the number of new tests being performed, researchers say.

"In many states, the testing is increasing, but the percentage of those people who are positive is actually going much higher," Osterholm said.

"This is not an artifact of just more testing at all."

Even with the increased testing, the country is still "way behind the virus," a former US Health and Human Services secretary says.

"We are still reacting. We're not ahead of it," Kathleen Sebelius said.

"The only way to get ahead of the virus is to tamp way down the cases in any area, and then test like crazy when a case appears, contact trace, and make sure you quarantine. We can't do that yet because we are still finding all kinds of people who have the virus."

What's happening in Arizona and other states could erase much of the progress made during weeks of stay-at-home orders.

"The number of new cases had been stabilizing in early May, and actually the positivity rate (in testing) had been improving," Humble said.

Florida, a popular destination for beachgoers, is also grappling with a surge in new cases and hospitalizations. The Sunshine State now has "all the markings of the next large epicenter of coronavirus transmission," researchers say.

And in Texas, where the rates of daily new cases and new hospitalizations are rising, Houston is "moving very fast in the wrong direction," Mayor Sylvester Turner told CNN affiliate KTRK.

"This is a health care crisis," he said. "Quite frankly, your failure, for example, to wear masks ... or to engage in social distancing directly impacts on somebody else."

Where states are seeing steady or improving numbers

"New York went from one of the highest infection rates in the country to one of the lowest because we made decisions based on science, not politics," Gov. Andrew Cuomo said Tuesday.

"We're seeing in other states what happens when you just reopen with no regard for metrics or data -- it's bad for public health and for the economy, and states that reopened in a rush are now seeing a boomerang."

Cuomo is consider forcing visitors from high-transmission states to quarantine upon arrival to New York state, he said.

Virus review: More voters head to the polls during pandemic. Here's the latest

Voting appeared to be running smoother in primaries on Tuesday than in elections held two weeks earlier in Georgia and Nevada. Also, a look at unexpected COVID-19 consequences and a reminder of how long the virus can live on surfaces.

Fireworks have humble origins, but have come a long way