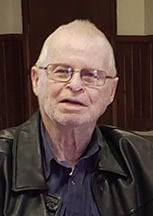 Dave was born on July 9, 1939, in rural Archer, the son of James and Mabel Stalker Moore. He attended local schools and graduated in 1958 from Monroe.

Dave farmed for Morris Farms and was a self-taught diesel mechanic. He owned and operated Moore Garage in Polk. He then owned and operated Nebraska Truck Service in York. Dave worked twenty-one years and retired from Sahling Kenworth in York. He then moved to Kansas and worked five years for Living Water Ranch in Olsburg before moving to Westmoreland.

Dave was an active member of Full Gospel Business Men and the York Assembly of God Church. In Kansas he was member of the Wamego Family Worship Center and served as a church board member. Dave was an avid Huskers and Atlanta Braves fan and passionate about attending all of his grandchildren’s events. In his earlier years he was a little league baseball coach.

Dave married Jacqueline Stone on Aug. 18, 1990 in York. She survives at their home.

Dave is also survived by his children: Joan Raffety of Lincoln and Thayne Moore of Kearney; his step-children, Benjamin Larson of Hastings and Kendra (Ian) Collins of Columbia, Tenn.; his grandchildren, Mandy Rettig (Adam) of Lincoln, Valerie Hotsenpillar of Lincoln, Amelia, Adeline and Ava Moore all of Kearney, Truett, Lucy and Gemma Collins all of Columbia; his great-grandchildren, Tadan, Cooper and Bricen Rettig; his siblings, James Moore (Virginia) of Hastings, Ruth Hawthorne of Grand Island, Paul Moore (Karen), Dennis Moore (Kathy) and Lyle Moore (Vicki) all of York, Janice White of Grand Island, Wayne Moore of Polk and thirty-nine nieces and nephews.

Dave was preceded in death by his parents; his siblings, Shirlee Hawthorne, Nancy Ziegler, Marilyn Rosenberry, and Stanley Moore; his mother and father-in-law, Leil and Shirley Stone, his daughter-in-law, Tamy Moore and a grandson, Josh Hotsenpillar.

Funeral services will be held at 10:30 a.m., Friday, Feb. 14, 2020, at the Wamego Family Worship Center. Pastor Pat Green will be officiating. Burial will follow at 4 p.m. at Greenwood Cemetery in York. Dave will lie-in-state, on Thursday, beginning at 3 p.m. at Campanella-Evans Mortuary in Wamego, where the family will greet friends from 6 until 8 p.m. They suggest memorial contributions to the David Moore Memorial Fund, and those may be sent in care of the mortuary. Online condolences may be made at www.campanellafuneral.com.