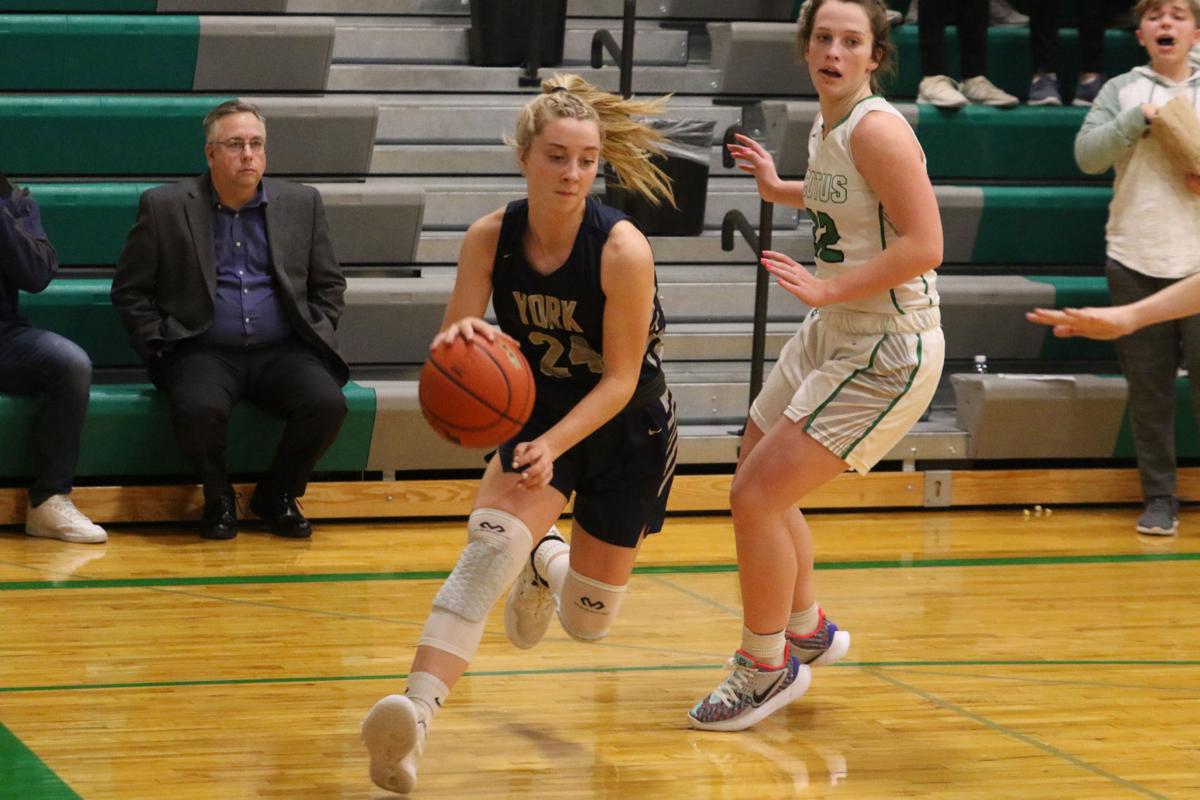 York sophomore Mattie Pohl (24) penetrates the baseline and dishes inside to fellow sophomore Masa Scheierman for the basket that cut the Scotus lead to 11-10 at the time. 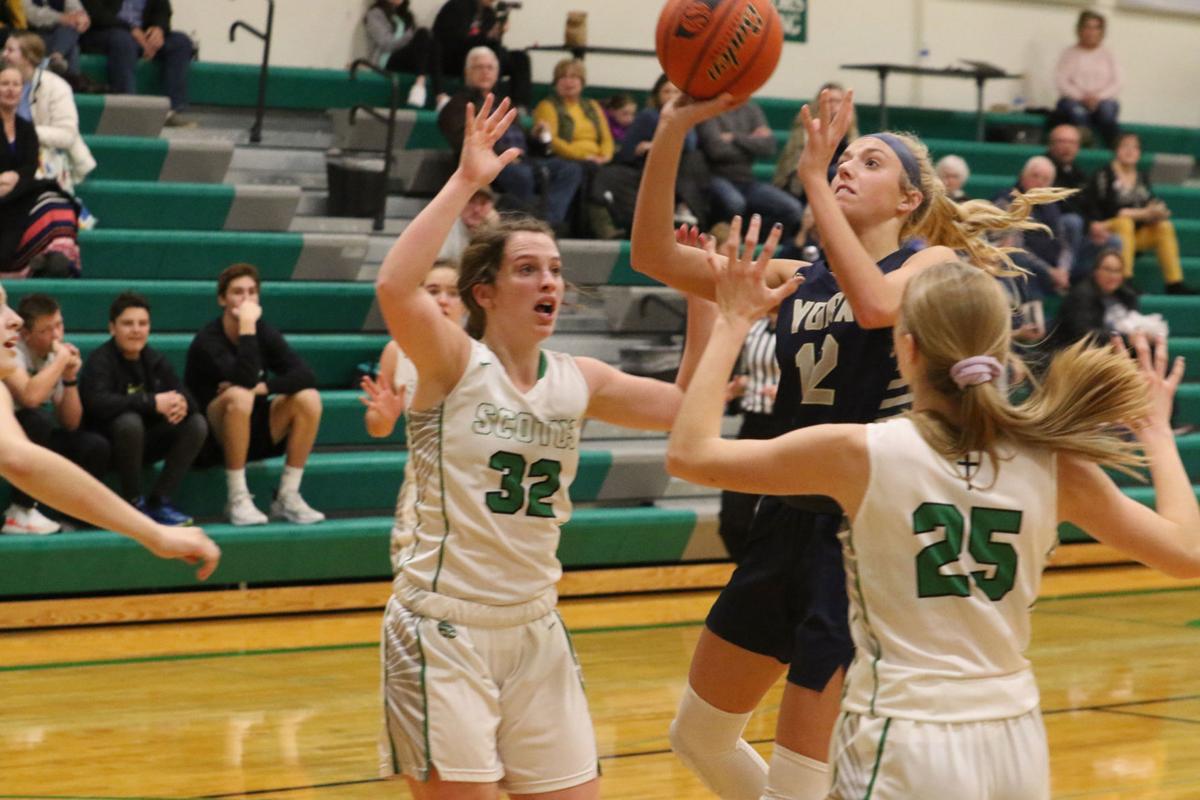 York junior Maddie Portwine (12) splits the Scotus defense of Chloe Odbert (32) and Grace Mustard (25) and puts up the short jumper in the paint. 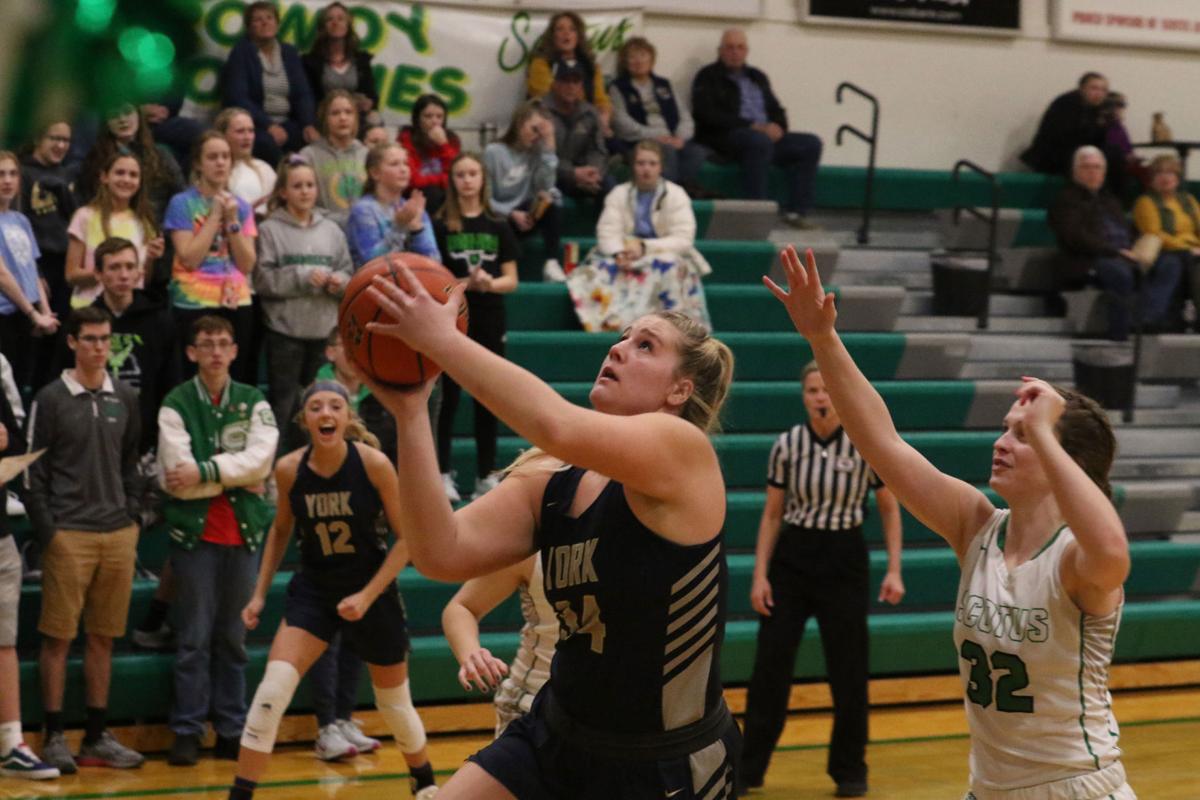 Early in the game York senior Natalia Dick (34) gets free for the point blank jumper for two of her four first half points. Dick and Masa Scheierman were on the bench most of the second quarter with three fouls each.

York sophomore Mattie Pohl (24) penetrates the baseline and dishes inside to fellow sophomore Masa Scheierman for the basket that cut the Scotus lead to 11-10 at the time.

York junior Maddie Portwine (12) splits the Scotus defense of Chloe Odbert (32) and Grace Mustard (25) and puts up the short jumper in the paint.

Early in the game York senior Natalia Dick (34) gets free for the point blank jumper for two of her four first half points. Dick and Masa Scheierman were on the bench most of the second quarter with three fouls each.

COLUMBUS – Not much of anything was going right for the Class B No. 6 York Dukes on Thursday night as they took on the Columbus Scotus Shamrocks.

Adversity was creeping up on the Dukes as they were in early foul trouble with both post players, Natalia Dick and Masa Scheierman on the bench with three fouls each in the first half.

But somehow York was able to stay the course and in the fourth quarter took control with a 12-5 scoring run on their way to a 43-40 win over the Shamrocks in girl’s non-conference action.

The Dukes used their length to create defensive pressure and forced the “Rocks” into seven fourth quarter mistakes and 19 for the game.

York led 4-2 in the first quarter when Scheierman scored in the paint with 2:58 to play.

It would be a long time before the Dukes would be on top again, and again it was Scheierman with the huge defensive play.

The sophomore picked the pocket of the Scotus guard, drove and scored to put York back on top with the clock ticking down in the final quarter.

York head coach Matt Kern said the Dukes were able to step up the pressure in the final eight minutes.

“We upped the pressure, because we only had two or three fouls, so we felt we could crank it up and it wouldn’t hurt us since they weren’t in the bonus,” said Kern. “We had to keep our bigs back because of foul trouble but our guards Addison, Mattie, Maddie and Destiny were able to make things tough on them.”

York was on top 41-39 and Scotus had the ball when the Dukes pressure forced yet another turnover.

The Dukes went 6 of 13 at the foul stripe in the fourth and that was good enough to hold off the hosts who had several chances to tie the score over the final 25 seconds.

York trailed 8-6 at the end of the first quarter and 24-19 at the break when Hailey Steffensmeier drained a 3-pointer from the top of the key at the buzzer to end the first half.

York’s Portwine would lead the way in scoring with 10 points, but all but three of those came in the fourth quarter as she didn’t score in the first half.

York’s Mattie Pohl, a sophomore kept the Dukes close in the first half with three second quarter points and she chipped in with five of her eight in the third quarter.

Scotus was led by Steffensmeier with nine and eight from Kamryn Chohon.

The Shamrocks were 9 of 18 at the foul stripe.

York turned the ball over 12 times and were out rebounded unofficially 27-26.

The 4-6 Shamrocks were not a team that Kern took lightly going in.

“They know how to compete in these typed of games. They have a hard time finishing, but they know how to make things tough on you. That’s a real good team with a great tradition,” Kern said. “I am just real proud of our girls. We dealt with some adversity, on the road, a tough atmosphere and some early foul trouble, but we had a lot of girls step up. To stay close early was the key, then we were able to use our defense to put them away.”

York (8-2) will be at home against Northwest on Saturday night to take on the all-class No. 10 Vikings and No. 2 Class B team.

“It’s a fun conference opponent that we get to play,” Kern added. “We saw them three times last year and I am excited to get to play them and see how we match up.”