In 2016 Maggie Malone competed in the Olympics at Rio De Janiero in the javelin event. She is the current collegiate record holder in the javelin, and despite the postponement of the 2020 Olympics, plans to be in Tokyo next summer to compete for the United States. 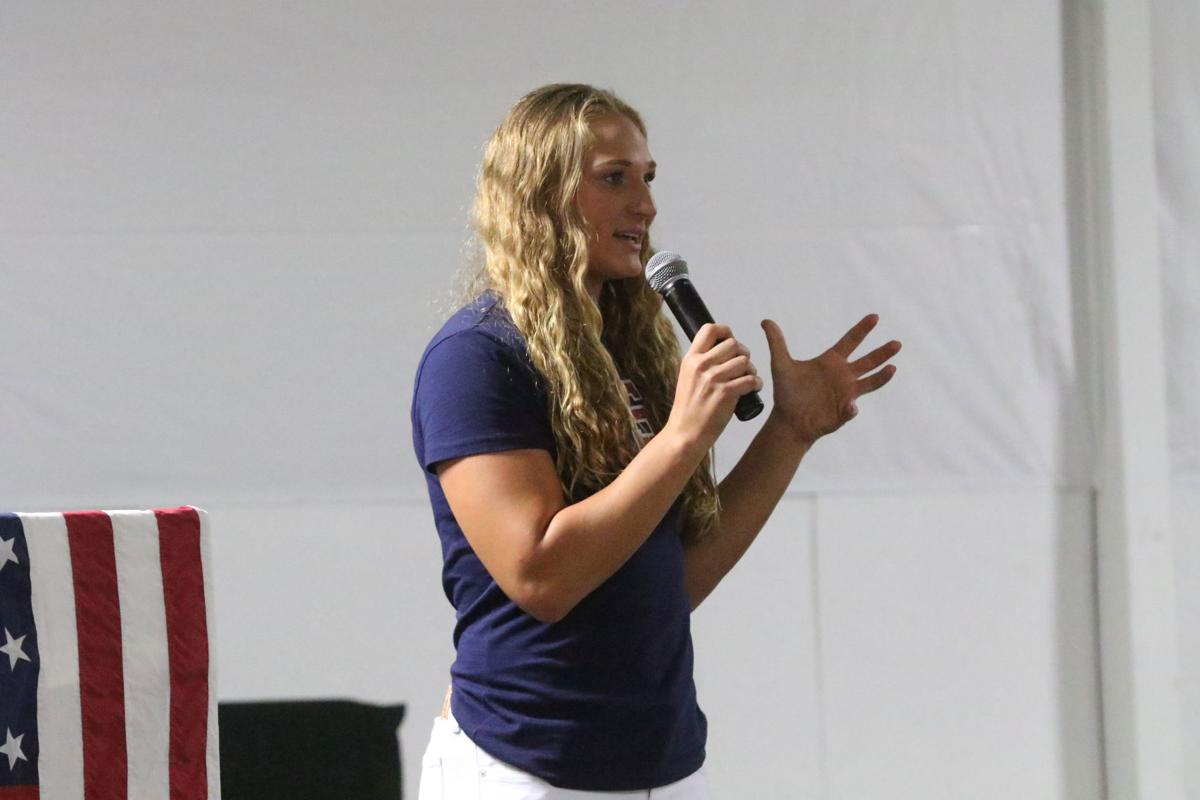 Maggie Malone shared her story in 2016 with a gathering of friends and family at the Ag Building in Geneva during a welcome home party. “Going to the Olympics was the scariest thing I have ever done in my life,” she said.

In 2016 Maggie Malone competed in the Olympics at Rio De Janiero in the javelin event. She is the current collegiate record holder in the javelin, and despite the postponement of the 2020 Olympics, plans to be in Tokyo next summer to compete for the United States.

Maggie Malone shared her story in 2016 with a gathering of friends and family at the Ag Building in Geneva during a welcome home party. “Going to the Olympics was the scariest thing I have ever done in my life,” she said.

BIRMINGHAM, Ala. – Back on August 27 of 2016, Fillmore Central graduate Maggie Malone along with her family returned to Geneva and the Fillmore County fairgrounds for a welcome-home party.

Maggie had just competed in the 2016 Olympics at Rio De Janiero.

Her sister Audrey graduated from Bryan High in Bryan, TX and Audrey was 2013 York News-Times Female Athlete of the Year Award.

The plan in 2016 was for both Maggie and Audrey to both be in Tokyo together for the 2020 Olympic Games, but things changed.

The COVID-19 pandemic hit and postponed the Olympics to 2021, and an injury to Audrey changed her plans.

“Audrey is no longer throwing the javelin and stopped competing after 2017 as she tore her UCL. She is first in her class at the University of North Texas as she finishes her Master’s in Speech Pathology. I’m still trying to get her to pick up the javelin again, but I think she’s pretty happy working with her clients,” said Malone, who is spending her time during the COVID-19 crisis living in Auburn, Ala., with her boyfriends family, Sam Hardin, who also threw the javelin at Texas A&M and is a two-time All-American.

Malone attended the University of Nebraska-Lincoln for two years after high school graduation where she took up the javelin. After competing in track and field for the Huskers she followed a calling to College Station, Texas where she enrolled at Texas A&M and completed her college career.

Maggie’s mom, Nancy Kindig-Malone, qualified for the Olympic games in 1970. Her parents currently live in Palestine, Texas and continue to teach and coach. Her dad Danny was the Fillmore Central football coach and Athletic Director at Fillmore Central.

“I really don’t think they’ll ever retire. I always joke that my parents will be memorialized on the track and football field – morbid, but true,” Malone said. “They love it though – it’s a great school district to be a part of. My brother, Cal, is also working at the school as well as coaching.”

Malone said she moved to Birmingham after receiving her Master’s Degree in Marketing and Analytics.

“I started a training group called USA Javelin Project. There are seven of us from the Southeastern Conference who I got to move out to Birmingham and train together. We are coached by two-time Olympian and former USA record holder, Tom Pukstys,” Malone said.

The former Fillmore Central Panther said the move to Alabama was to continue pursuit of her Olympic dream, but things changed fast once she got out there.

“We came here when everything started shutting down and we didn’t have access to any training facilities in Birmingham. So we turned the garage into a gym and have been throwing in the field next to his house out in the country – it honestly reminds me of when I was in high school training, we just have to make due with what we have,” Malone said. “And it’s been so fun and you truly realize that you don’t need all these tools and weight equipment to accomplish what you need to. We always joke that at 5 p.m. the ‘Hardin Healthclub’ opens up.”

Malone said a local gym in Auburn donated some of their gym equipment. She also said the COVID-19 pandemic has forced her to slow down, as she had been burning the candle at both ends.

“Honestly, the pandemic has just affected my life by forcing me to slow down, which was something I needed. I was running on all cylinders prior to this pandemic, and now I’ve been forced to live out of a suitcase the past eight weeks and just be still,” Malone said. “I’ve learned that I don’t have control and learned to take a posture of gratitude every day. I’m in a small category right now where I’m blessed enough to still have a job, so I’ve been working every day, but have the luxury to do it from home.

“After work, I take about 20 minutes of rest and then I go to train. So, I’ve tried to keep my schedule as similar as it was before COVID. I’ve had much more time to watch videos with my boyfriend and really understand our sport more. If you can believe it, he’s more obsessive with this sport than I am. But fun stuff – I do a 20 minute yoga video every single day at lunch. It’s become more of necessity than anything else at this point.

“I absolutely love it and provides me clarity and confidence as I go on with the rest of my day – it’s also extremely beneficial to javelin. Sam and I built four raised garden beds and have started our own garden.

“Lastly, I have refound my joy in bike riding in the evenings. I have not been able to do this since I don’t know when. We have done this at least three times a week and it always makes me reminisce on living in Geneva and biking through the town with my family. It makes me so joyful.”

“I literally googled: best places to work in Birmingham, and after a list of 20 was delivered to me, I researched one called Wildsparq and thought, “huh, this aligns with everything I would want to do and be a part of,” Malone said. “The vision of the company is to glorify God by building multiplying movements of multiplying leaders in the for-purpose market space. They are highly encouraging and supportive of my dream and have been accommodating to my schedule for training and competition. They even got together to buy me my first javelin ever!”

The Olympic goal has not changed even with the postponement; Maggie fully intends to be in Tokyo next summer.

“I think it was a great decision to postpone the Tokyo Olympics. I think it was the most socially responsible decision, and I think most athletes stand behind it. Especially now, as we have seen how this virus has really devastated parts of the world. There was a sense of disappointment when the decision was first announced, as I had moved all the way to Alabama to pursue this dream…but I quickly reset my mindset to look at this as an opportunity to work on some key elements of my event that I wouldn’t have had time to work on during the season,” Malone said. “The goal hasn’t changed, just the timeline, and honestly, this came in my favor. I am slowly coming back into this sport after numerous injuries, so God has really gifted me time to build on the foundation I’ve already established. The dream is still there, and the fire is stronger than ever.”

Malone also talked about the disappointment that this year’s seniors had to endure and shared how she would have felt.

“I would have been devastated and pissed. I can’t imagine having all these big moments that you work for and look forward to, be taken away. All I can say is that I probably would have cried…a lot,” Malone said. “But, I do know that you have control over your perspective and that as much as this sucks – yes, sucks – you have to continue looking for the joy in life.

“But here’s my thought…these seniors are going to be incredibly strong and resilient people in their future. They are learning lessons right now in this pivotal moment in their life that will change the trajectory of their future,” said Malone. “They are experiencing something right now that will shape the way they look at the world forever. I can’t tell you anyone else who has ever faced the same circumstance that they are in. They’re learning that they’re not in control and that nothing is ever for certain.’

I mean think about it – we thought all these things were a ‘certainty’ in this world: the Olympics, graduations, March madness, etc.”