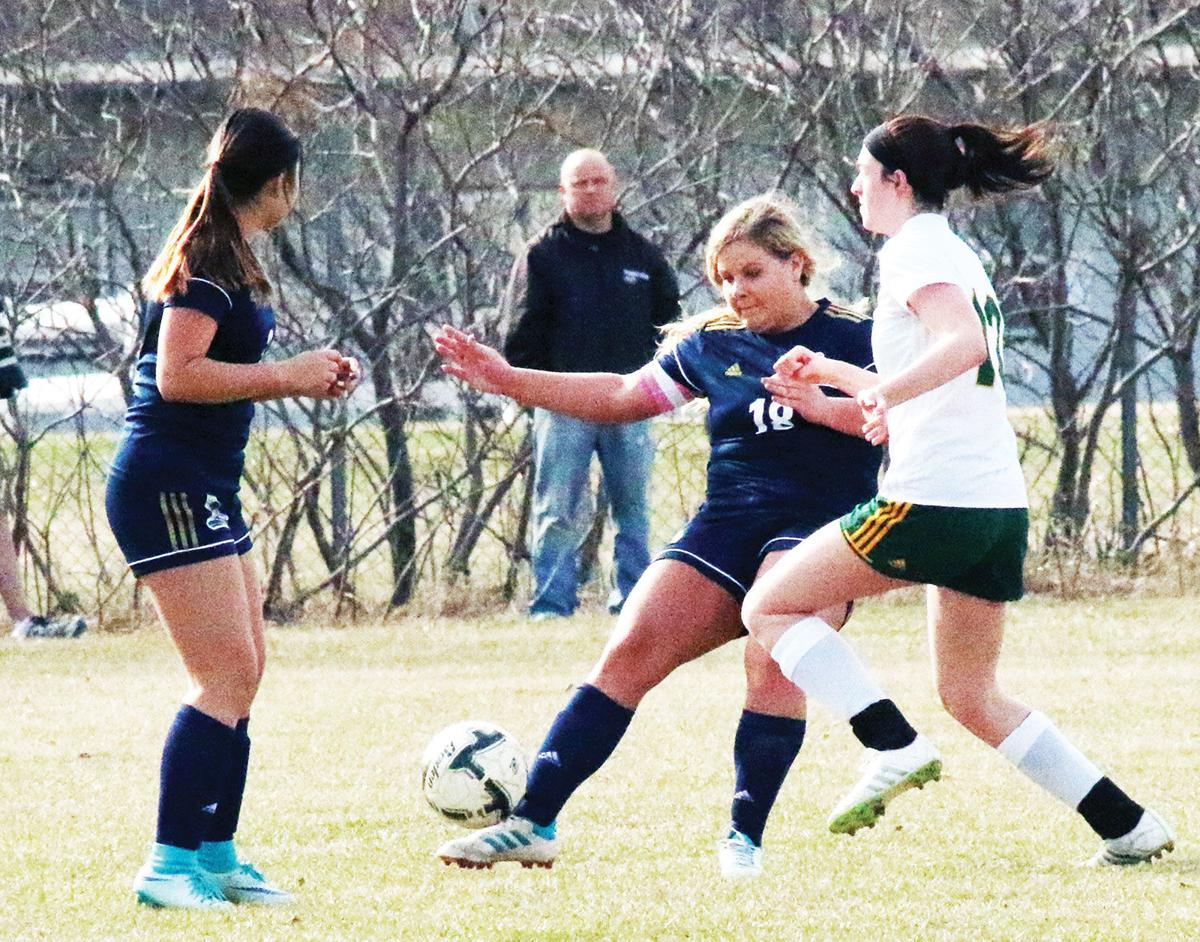 York defensive specialist Alexis Linder (18) turns back the Kearney Catholic attack in the Dukes’ opening game of the 2019 season on April 1. Linder’s availability for the 2020 campaign is in question due to an injury. Linder is a senior and a three-year starter. 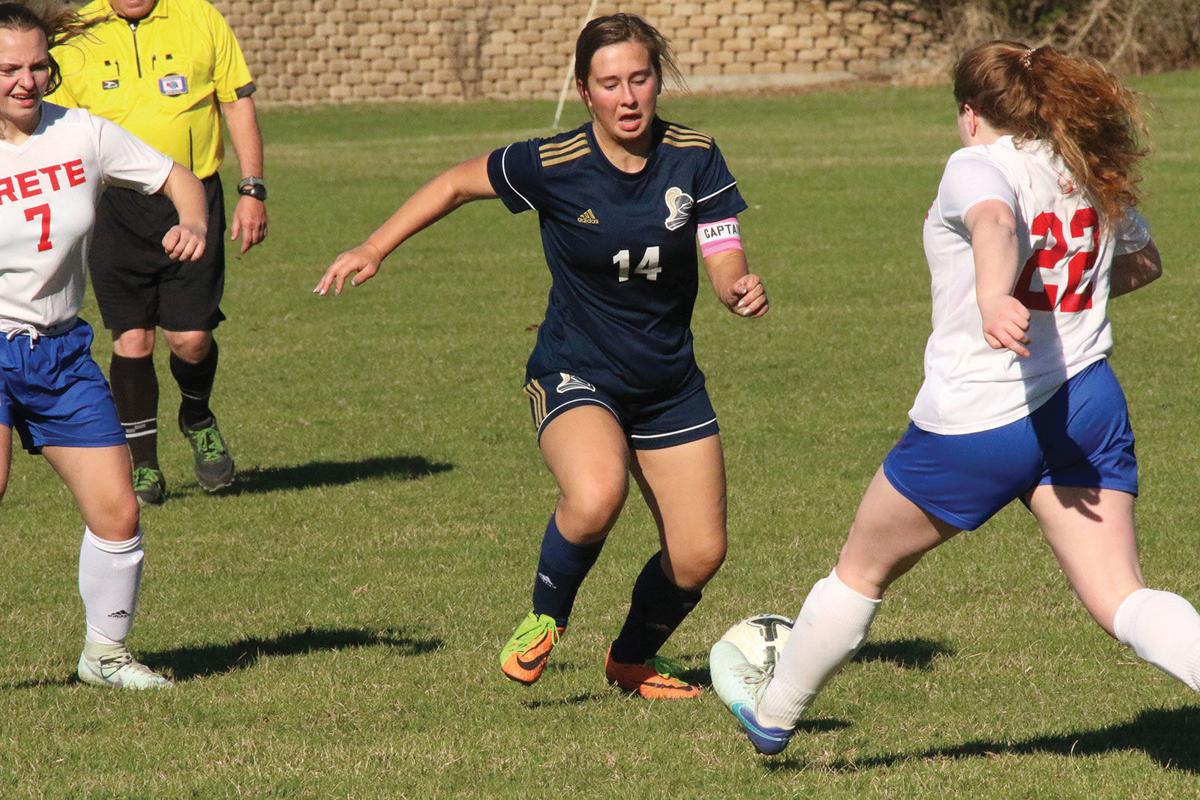 York senior Bailey Robinson (14) directs the ball between two Crete defenders in action last year. Robinson scored two goals in 2019 and will be one of the main pieces to the Dukes’ offense.

York defensive specialist Alexis Linder (18) turns back the Kearney Catholic attack in the Dukes’ opening game of the 2019 season on April 1. Linder’s availability for the 2020 campaign is in question due to an injury. Linder is a senior and a three-year starter.

York senior Bailey Robinson (14) directs the ball between two Crete defenders in action last year. Robinson scored two goals in 2019 and will be one of the main pieces to the Dukes’ offense.

EDITOR’S NOTE: On Monday, March 16, the Nebraska School Activities Association suspended all activity practices until March 30 and all activity competitions until April 2 due to COVID-19.

These suspensions may be extended should the conditions warrant.

Until an official decision has been made in regards to spring sports, the York News-Times sports department will be running its spring sports previews for girls and boys track and soccer, as well as boys golf and girls tennis, in the daily sports section.

YORK – The York offense accounted for just nine goals last year, while putting together a 2-10 record on the field.

Better than two-thirds of the Dukes’ offense has graduated, leaving second-year York girls soccer head coach Nick Sozio in search of some girls who can the score.

With less than a one-goal per-game average in 2019, the Dukes have to find some scoring, and that could be a challenge.

On the defensive side, it may be even tougher as three-year starter Alexis Linder may not be available for the entire season due to an injury.

“The biggest need of the team is experience. Alexis Linder enters the season with an injury that may keep her out the entire season,” Sozio said. “She’s been a standout player and three-year starter on defense.”

Replacing Linder will take a team effort, and that will come from a huge number of underclassmen.

“We will have at least three freshmen and six sophomores that see significant playing time on varsity,” Sozio said. “We’ll have only three juniors and two seniors playing varsity. So, underclassmen will be very important to the team. Replacing Alexis on defense will take a team effort. We’ll have five new starters this year, all with little soccer experience.

“Building team chemistry and unity will be very important for the team’s success.”

In 2019 as a junior, Bailey Robinson led the team with 26 shots, 13 of those on goal and two escaping the goal keeper. The rest of the offense has moved on, leaving Sozio with some questions on that side of the ball. Both Robinson and Linder were recognized as all-conference honorable mention last year.

Junior Cassidy Cole logged the most time in front of the net as goal keeper for the Dukes last year and finished with 44 saves on 68 shots, leaving 24 to find the back of the net.

Two more juniors, Aleyah Hunzeker and Elena Aguilar, are also both back.

Sophomore forwards Brittney Driewer and Baylie Holthus round out the team’s six returning starters and letterwinners, along with sophomore Nathaly Argueta, a midfielder. Both Driewer and Holthus will play a huge roll for York on the offensive side of the ball.

“Bailey (Robinson), Baylie (Holthus) and Brittney (Driewer) will be very important to our offense, while Cassidy (Cole), Aleyah (Hunzeker) and Nathaly Argueta will be very important to our defense,” Sozio said. “I’m excited to see the sophomore class continue to get better and a couple players break out this year. There are some good freshmen athletes on the team and they will make important contributions to the team.”

Joining the team this spring is senior Abbey Seevers along with freshman Abrielle Linder, Avalon Loven and Alyssa Alt.

Sozio feels the Dukes will be competitive in both the Central Conference and with the teams assigned to the district field.

“Seward, Crete and Beatrice are all teams we can beat. Seward had the best season of these teams last season going 7-7,” Sozio said. “We played them very tough in districts last year, losing 1-0 in overtime. There are some very good teams in our conference. Some of the best teams we’ll face all season are in our conference (Columbus Lakeview and Lexington).”

Sozio will be assisted in coaching duties this year by Andrew Gowins.

“We’ll be a young team that will have our growing pains and make some mistakes as these players gain experience,” Sozio said. “The girls have shown great work ethic and will improve greatly throughout the season. By the end of the season, we should be in a good position to compete for the district title.”