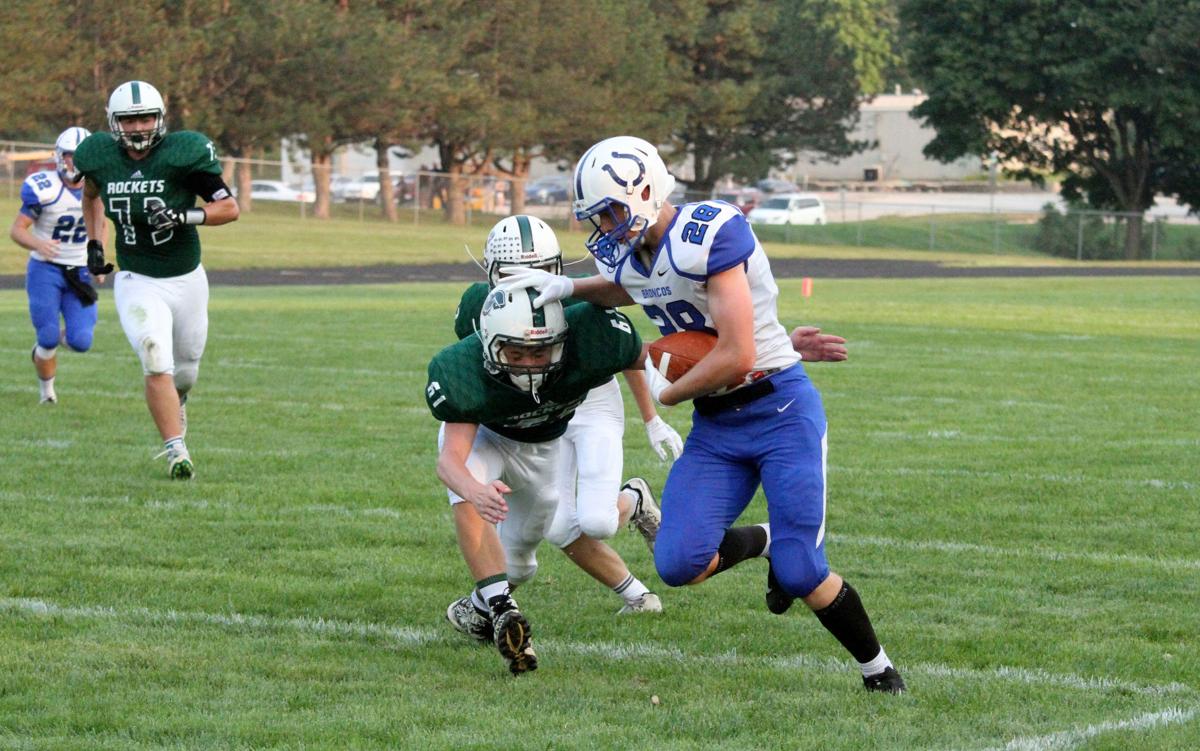 Centennial’s Joel Bargen (28) finishes his run after hauling in a pass in the first half of the Broncos’ season opener last year on Aug. 24 in Syracuse. Bargen is one of the top returning receivers in the York News-Times’ coverage area. 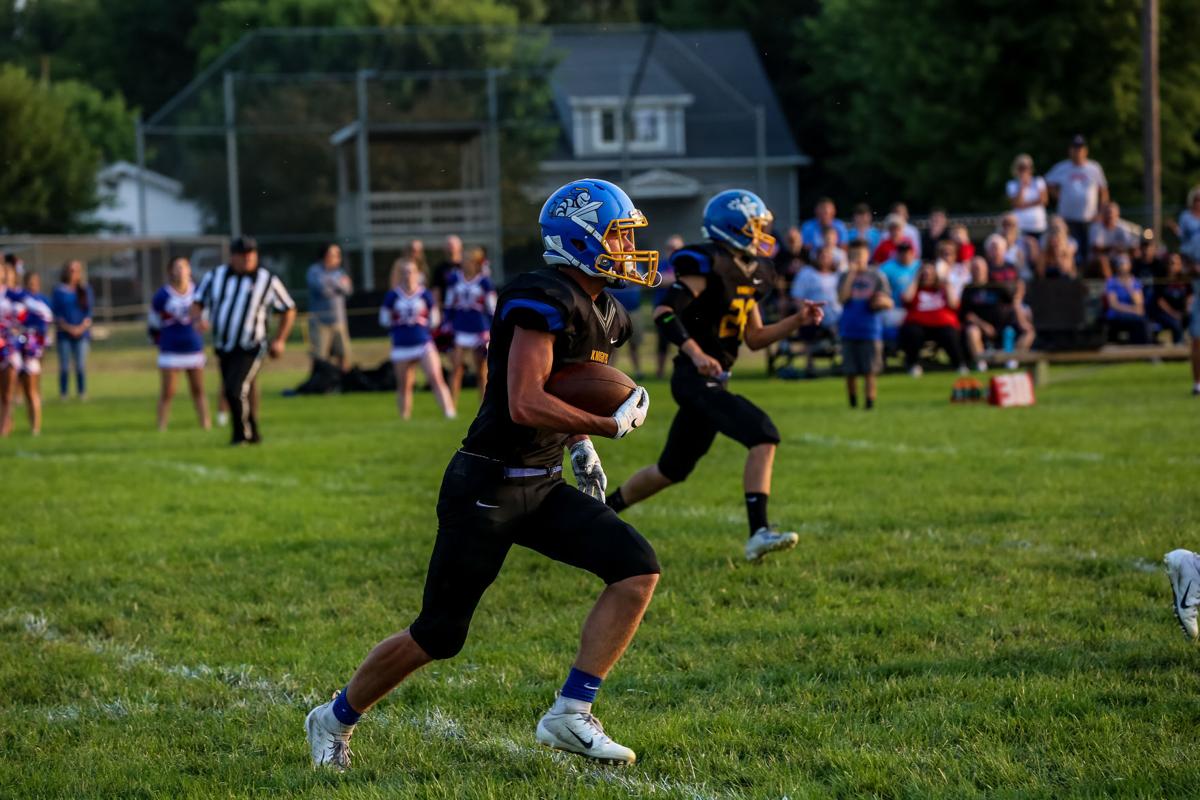 Nebraska Lutheran’s Zach Richert, shown here against Palmyra last season on Aug. 24, hauled in 22 catches for 390 yards and six touchdowns as a junior. He’s back for his senior campaign in 2019 and is one of the top returning receivers in the York News-Times’ coverage area. 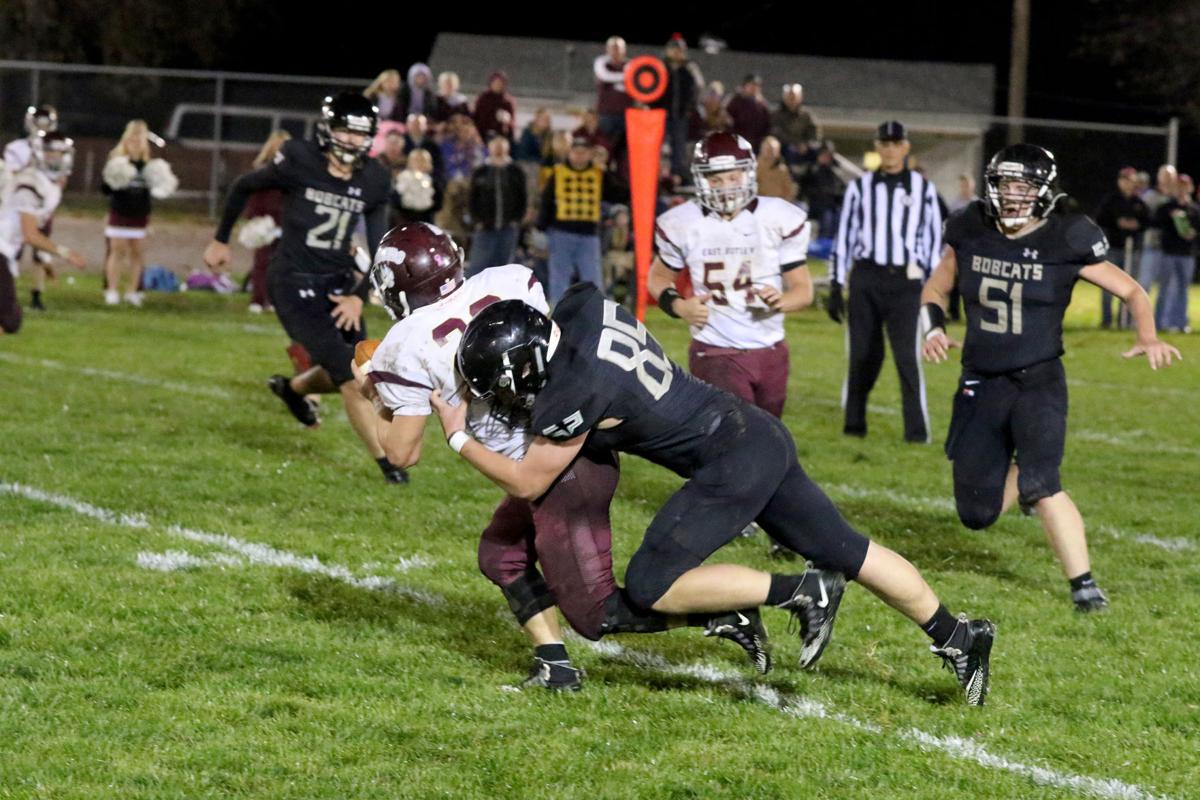 Exeter-Milligan’s Max Zeleny, shown here in a playoff game last season against East Butler on Oct. 25, is not only one of the top returning defensive players in the York News-Times’ coverage, he’s also one of the best returning receivers as well.

Centennial’s Jackson Hirschfeld was the cream of that crop, as he hauled in a whopping 97 passes for 1,304 yards and 16 touchdowns along the way to helping deliver the Broncos’ first state championship. But Hirschfeld is graduated and will be playing basketball at Concordia University as a freshman.

Also departed is the uber-talented Brady Danielson from York, who seemed to always catch the ball with his hands and away from his chest, just like they teach it. Danielson, who will be playing Division I basketball at the University of North Dakota later this year, caught 49 passes for 929 yards and seven scores in the Dukes’ run-heavy offense.

So, yes, the local area loses some talented pass catchers. But not all of them are gone. The coverage area brings back some good ones, too, and the YNT is here to break down the top three.

Next Friday, the YNT will have its final installment of this series as it breaks down the top three returning defensive players.

*These top returning receiver selections are in alphabetical order and based off performances from the 2018 season.*

Centennial won the Class C-2 state title last season in dramatic fashion when four-year starting quarterback Wyatt Ehlers took the shotgun snap, rolled to his right and found his top target, Hirschfeld, in the back of the end zone for a game-winning 2-point conversion against the favored Norfolk Catholic Knights.

It was a heck of a season for Centennial and its head coach, Evan Klanecky. But Klanecky and his staff will head into preseason practices with a new-look team. The Broncos will be without a massive group of 19 players from last year’s squad that are now graduated.

But one of those returning pieces is Joel Bargen, a 6-foot-4, 205-pound tight end that caught 25 passes for 291 yards and two touchdowns as a junior last year. With the team’s two leading receivers from last season – Hirschfeld and Max Tomes – graduated, Bargen will be stepping into a greater role in his senior campaign.

“He has great hands and also does a great job of setting the edge or swipe blocking if need be,” Klanecky said of Bargen. “He’s a very well-conditioned player with a great mindset and a very coachable kid.”

Bargen, who is versatile enough to shift out to a more traditional receiver position that allows the offense to go from 21 (two backs, one tight end) to 11 (one back, one tight end) personnel, had his best game in one of the most important contests last season.

Against Aquinas Catholic on Sept. 21, the Broncos defended their home field with a 28-21 win, and Bargen hauled in six catches for 60 yards and one touchdown. Then in a tight 33-28 quarterfinal playoff win over Bancroft-Rosalie/Lyons-Decatur Northeast on Nov. 2, Bargen caught three passes for 53 yards, including a 36-yard reception.

Centennial will open the season at home in Utica against Syracuse on Aug. 30. Other home games for the Broncos include Battle Creek on Sept. 13; North Bend Central on Oct. 4; David City on Oct. 18; and Twin River on Oct. 25.

Of the 55 completions thrown by the Nebraska Lutheran Knights’ run-focused offense last season, 40 percent of them were caught by Zach Richert.

Richert is one of the more talented and versatile athletes in the YNT coverage area. The 5-10, 170-pounder is a three-sport athlete and state-track qualifying high jumper. During his junior campaign last season, he led the Knights with 22 catches for 390 yards and six touchdowns.

“Zach’s athleticism and ball skills make him a big-play threat,” Nebraska Lutheran head coach Benjy Wells said. “He has developed as a route-runner and is able to make good things happen after the catch. He continues to work on his game and expanding his skill set for the upcoming season.”

Nebraska Lutheran will open the season on the road at Palmyra on Aug. 30. Other road contests for the Knights include at Thayer Central on Sept. 13; at Cross County on Oct. 11; and at Osceola-High Plains on Oct. 25.

The Knights’ games in Waco begin with Nebraska Christian on Sept. 6; Heartland on Sept. 20; East Butler on Sept. 27; and Exeter-Milligan/Friend on Oct. 18.

In their first season as a co-oped football team, the Exeter-Milligan/Friend Bobcats went 11-1, made the semifinals of the D-1 playoffs and had two 1,000-yard rushers.

Although the Bobcats were a very run-oriented team – they averaged 294 rushing yards per game – tight end Max Zeleny, who was dubbed “Mad Max” by his hometown announcer, was still able to hurt opponents as a receiver. Last season as a junior, Zeleny led EMF with 24 catches for 413 yards and six touchdowns.

Zeleny provided the Bobcats’ passing game some consistency, too. There was a span of four consecutive games during the regular season where Zeleny caught at least one touchdown.  In a 60-28 win over Palmyra on Aug. 31, Zeleny hauled in two catches for 65 yards, both of which went for touchdowns. Then on Sept. 7 in a 48-12 win over Lourdes Central Catholic, he caught five passes for 36 yards and one score. The following week in a 62-20 victory over Thayer Central on Sept. 14, Zeleny had three receptions for 80 yards and one touchdown. And last, but not least, on Sept. 28 in a 50-6 win over Osceola-High Plains, he caught three passes for 51 yards and one score.

Zeleny was also the leading tackler on defense with 118, including 63 solo stops and 55 assists.

EMF begins the season Aug. 30 at home against Tri County. Other home games include Thayer Central on Sept. 20; East Butler on Oct. 11; and Cross County on Oct. 25.

Away games for the Bobcats include at Palmyra on Sept. 6; at Lourdes Central Catholic on Sept. 13; at Osceola-High Plains on Oct. 4; and at Nebraska Lutheran in Waco on Oct. 18.