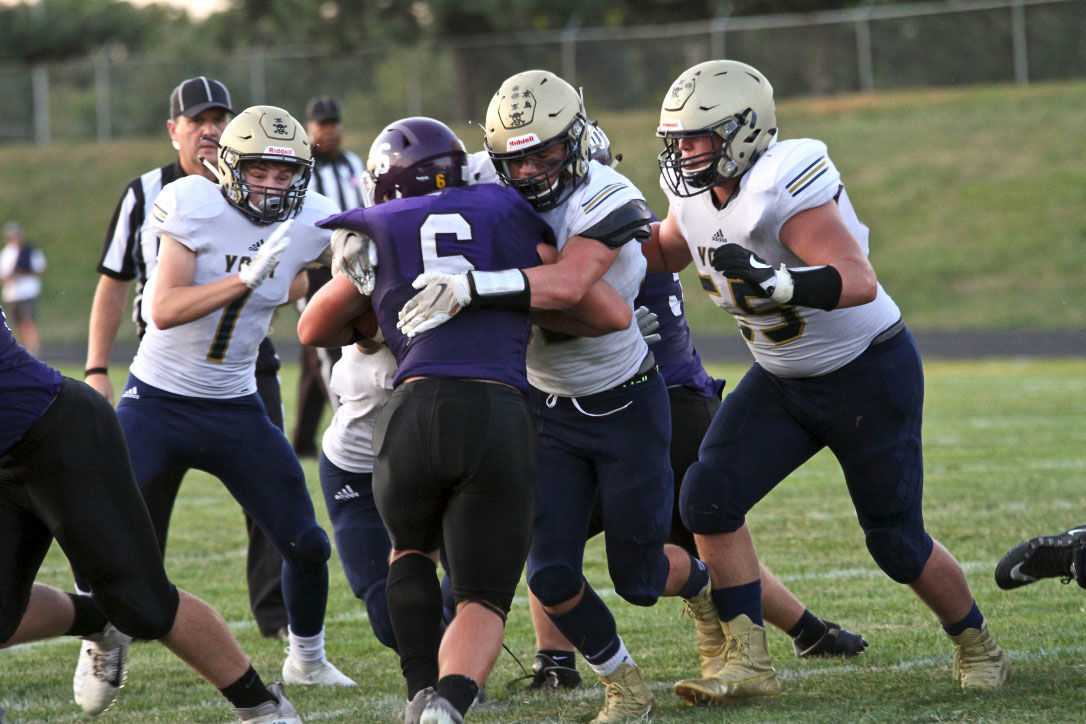 York senior linebacker Tom Erwin wraps up Blair running back Dexter Larsen during Week Two action on the road at Blair back on Sept. 6. Erwin led the Dukes in tackles this past season. 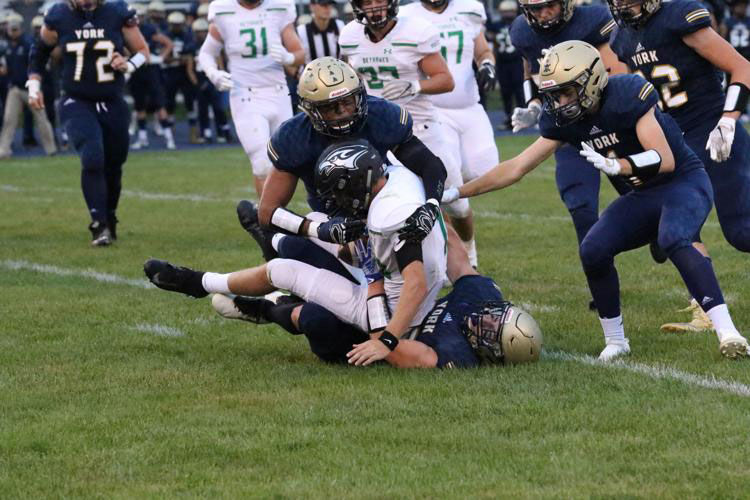 York senior linebacker Tom Erwin wraps up Blair running back Dexter Larsen during Week Two action on the road at Blair back on Sept. 6. Erwin led the Dukes in tackles this past season.

YORK – Seven players on the York Dukes football team found their names on the B-3 all-district team.

Seniors Tom Erwin and Brayan Rodriguez were the ones selected to the first team, while seniors Andrew Clark, Jacob Diaz and Beau Woods, along with juniors Wyatt Collingham and Jake Erwin, were all honorable mention.

Erwin, a 6-foot-3, 220-pound gutty senior who played nearly every position on offense out of necessity, was the heart and soul of the team in a down year.

Even when forced to play with a club cast on his broken left hand for most of the season, Erwin was still able to rack up a team-high 110 tackles with three for a loss at his middle linebacker spot. Erwin even tied the school record for most tackles in a single game with 20 on Oct. 18 against Seward. Offensively, he caught 10 passes for 139 yards and rushed for two touchdowns, too.

Another senior that battled and played through injuries was Rodriguez, a 6-foot-2, 220-pound defensive end and fullback.

Even though he missed some time on the field, Rodriguez was still fourth on the defense in tackles with 60. He also tied with Chase Cotton for most sacks with four and recorded three tackles for a loss.

The 6-foot-4 Clark was a consistent starter and valuable member on the offensive line for the Dukes all season while Diaz had his senior year end early with injuries after rushing for 305 yards and three touchdowns.

Beau Woods was a two-way starter on the offensive and defensive lines. He had 43 tackles, one sack and one tackle for loss on the year.

Collingham was a multi-threat for opponents to defend. The junior returned two kickoffs for a touchdown and also returned a fumble 53 yards for a score. As a safety on defense, Collingham was third on the team in tackles with 64 and also picked off a pass.

Due to an injury to starting quarterback Ty Bartholomew, Jake Erwin started the final three games of the year at quarterback and also saw action at running back and other positions. He rushed for 288 yards and two touchdowns while also recording 47 tackles and three stops for a loss as an outside linebacker.

Centennial girls drop tough one on the road at Central City